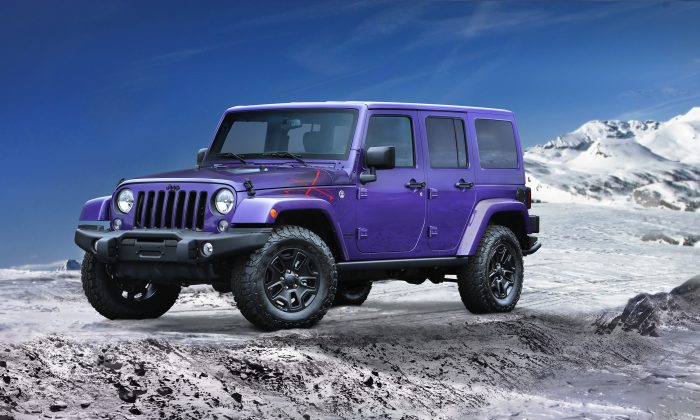 Jeep makes Wrangler for a purpose. Well, it is not to drive freeways, ride smoothly along pristine avenues, or explore affluent coastal highways. Although Jeep can do all of these.

Jeep made Wrangler to take on the toughest off-road trails this old world has to offer. Places where few have trod, and even fewer have done it by motor.

The 3.6 L 24-valve V6 engine led by a 5-speed automatic transmission produces 285 hp and 260 lb-ft of torque, while delivering 18 mpg. Assisted by Command-Trac 4×4 System with shift-on-the-fly, it allows you to go easily through the gears.

New-generation Dana 44 heavy-duty rear axle with 3.21 rear axle ratio and Dana 30 solid front axle provide the strength, toughness and roughness for Wrangler to go anywhere–taking you along for the ride.

Wrangler is proud of its rich good looks.

Off road items like 4-wheel disc brakes, electronic stability control, traction control, electronic roll mitigation, and hill start assist are all standard; adding safety and control to both you and your off road experience.

Jeep traces its roots back to World War II. There are several suggestions where the name Jeep comes from.

Maybe it was the slurring of the letter G for government and P for passenger vehicle. Or maybe it’s for the cartoon character Popeye’s jungle creature. After all, Popeye was the government’s leading advocate for eating iron-rich spinach. No one really knows, but one fact is that in 1943 Jeep was registered as the Willy MB.

Jeep was sold in goodly numbers down through the years, but in 1992 Jeep finally made the world premiere at the Detroit Auto Show. It became known as the Jeep Grand Cherokee, and would sell 1.6 million over the next few years.

Just because this Wrangler takes on the wilderness, it nevertheless is comfortable and pleasing inside. The auto-dimming mirror with reading lamp, air conditioning, power windows and door locks, and leather-wrapped steering wheel with audio controls are standard.

The base price for Jeep starts at $27,895 for the Sport model. To celebrate this special 75-year milestone, Jeep is offering the Unlimited 75th Anniversary Edition for $38,925. Both interior and exterior features are added as part of the Anniversary package.

Wrangler’s interior is not forgotten with heated leather front seats and an electronic vehicle information center.

But the real advances appear s to be on the outside. Wrangler suits proudly on 17-inch X 7.5-inch bronze aluminum wheels, accompanied by 2 front and 1 rear tow hooks. The Trac-Loc differential rear axle adds an extra safety feature to the vehicle.

It was early morning. The smells of fall were in the air. The terrain was slightly rolling with cottonwood and post oak trees scattered throughout the 300 acre ranch. On hilltops, deep rooted mesquites and salt cedars clung desperately to steep cliffs. A small, but full creek with high embankments ran near the center of the property. Smaller hills provided a boundary for the northern perimeter.

I spent one glorious afternoon covering every bit of this small ranch in my Jeep Wrangler.

I rode the creek bed, up over the embankment then dodged the tree squirrels while resting occasionally to listen to the bird life. Sounds of wild hogs could be heard rooting along the creek near the beaver dam.

Just as the sun settled down behind the horizon, I closed the gate to the property.

The ride home was invigorating, as mud slapped against the undercarriage and onto the country road.

A keepsake memory tucked away in an old man’s heart. I can still hear the flight of quail that took flight from the high grass just as the Jeep mounted the top of a small hill.

A great adventure provided by a new Jeep Wrangler.