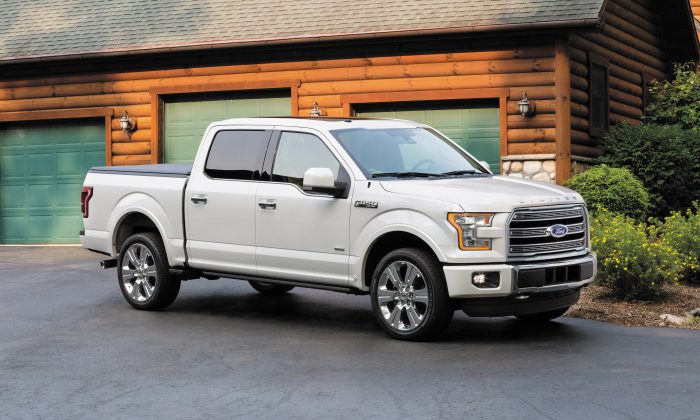 It would take a full page to list all the first-in-class, best-in-class, class-exclusive, and new features that the 2016 Ford F-150 carries.

That’s the reason I selected the F-150 to take me and my wife on a 1,000-mile round trip from Dallas to the Big Bend/Brewster County region of Texas.

This November was the 50th anniversary of the CASI Terlingua International Chili Championship, a chili cook-off celebration held each year near the ghost town of Terlingua.

It was my freshman year in college when I attended the very first chili cook-off. It involved a whole lot of partying, although it was strictly a spectator sport for me. No credentials were needed except a cooler full of ice and some adult beverages. There were plenty of willing participants in doing playful, sometimes stupid, things.

Sharp curves were easily mastered because of superb steering.

This year I was one of the judges for the contest’s finals. Every hill, gully, ridge, and dry creek bed for miles around the campsites was covered with camper trailers, RVs, tents, and “lean-tos.” There were people and cooking teams from all over the world, dressed in every kind of cultural wardrobe or representing numerous political expressions. There were trucks everywhere—most of them made by Ford.

Hundreds of cooking teams and judges were to participate. Nearly a week was spent getting the campsites set up, listening to great music, eating and tasting indigenous foods. We also consumed great volumes of brewing specialties. The actual judging was Saturday, Nov. 5.

There were two chili competitions and camps. I judged the CASI Terlingua International Championship Chili Cook-Off, held on the grounds of the Rancho CASI de los Chisos. For those new to chili culture, CASI is the acronym for Chili Appreciation Society International.

The other competition was just a few miles down the road in the ghost town of Terlingua. The “Original Terlingua International Championship Chili Cook-off,” started by Frank X. Tolbert and Wick Fowler, was also celebrating a 50th anniversary.

For the long road trip to the southwest, I drove a white F-150 with a 3.5 L EcoBoost direct-injection twin-turbo V6. This engine delivers 90 percent of its peak torque at 1,700 rpm, which holds on strong up to 5,000 rpm.

With legal speed limit between 75 and 80 mph nearly all the way, I kept the truck moving right at the maximum limit the entire trip. The EPA estimated fuel consumption is 22 mpg highway, but mine was nearly 25 mpg.

It rained most of the way to the Rio Grande near Big Bend National Park. Roads that were only two lanes southeast of Odessa off Highway 20 still posted the 75 mph speed limit.

Even with darkness falling we were making good time. The cabin was quiet as satellite radio delivered quality sound. Sharp curves were easily mastered because of superb steering, while lighting was never a problem. Quad-beam LED headlights, LED tail lights, side mirror spotlights, and fog lamps provided excellent visibility.

About 50 miles from our destination, the bottom dropped out of the storm clouds. Hard rain pelted down and visibility began to deteriorate at a distance. Wind caused the few mesquites lining the fence rows to bend double by its sheer fierceness.

I reduced my speed as the rain continued and the ditches on each side of the road began to fill. I topped a hill and all seemed OK down into the valley, but dark pavement and dark running water obscured the danger. There was no bridge or warning before we hit the water.

We hit the water hard. Water came up over the hood and splashed above the cab. For several seconds we were completely blinded. Once the frantic wipers caught up we had made it to the other side. My heart was in my throat and my wife was in my lap. We were shaking, but the truck acted as though this was all in a day’s work.

I took some real criticism about my speed as numerous suggestions came from my wife. Words like stupid, foolish, and divorce were expressed. Trying to defend myself, I took some responsibility for our survival, attempting to focus on my great driving skills and calming attitude during a crisis.

The rain continued to fall and my spirits dipped to new lows. But my wife’s spirits brightened as she came over and cuddled a little.

“Don’t worry,” she replied with a smile. “I’ll drive on the way home.”

A few days later, under a beautiful, blue sky we crossed the same creek—completely dry then—as we headed home. On both sides of the road were low water measuring sticks that indicated a measurement of five feet at the top. Both had been underwater when we came through a few nights earlier.

I would like to think I had played a part in safely crossing the exploding creek bed. But I also know that it was the 22-inch polished aluminum wheels and 3.55 electronic-locking rear axle that gave me the help I needed. The 145-inch wheelbase, 231.9-inch length, and 9.4-inch of ground clearance also helped.