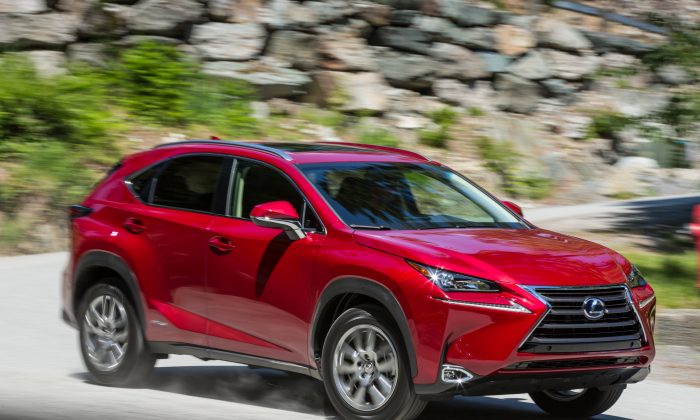 The NX is a sports crossover vehicle that articulates superb technology. It offers a package that strives to meet individual needs and at the same time capture features enjoyed by almost everyone.

The NX comes in several configurations, boasting two motors. The 235-hp 200t is powered by a 2.0 liter turbo-charged four-cylinder for those that thirst for a tsunami of adventure. Those that favor a greener technology will enjoy the 194-hp 300h hybrid model.

Both models are standard equipped with front-wheel drive and a righteous feeling automatic transmission technology. Each model has its own pro-active AWD system—Dynamic Torque Control for the 200t and E-Four AWD for the 300h. Let’s visit, for just a moment, the 300h.

The hybrid drivetrain powers the front wheels with a combination of gasoline and electric power and uses an electric motor to power the rear axle. The E-Four AWD system varies the torque that is supplied to the rear axle according to need. This saves fuel and energy because the vehicle uses all-wheel drive only when needed.

You command the NX through the new Remote Touch input device, which looks like a laptop touchpad with haptic feedback and pinching and swiping controls. A distinct multi-level information display gives you important vehicle readings that help you to determine the time, space, direction, and distance that you wish to explore. There is even a G-force meter and boost gauge.

The features I enjoyed the most were the HD Radio, Bluetooth, automatic phone book transfer (even turns down the radio for incoming calls), as well as complimentary traffic and weather data.

There is an eight channel amplifier with digital signal processor that enhances the sound quality.

The NX exterior features a bolder spindle grille with an L-Finesse design that looks more like a sports car than a CUV.

Both NX models have five seats with “quiet ride” cabin quality. Even the back seats are comfortable.

I drove the NX in Seattle for a couple of days. It rained both days. Quite heavily the first day, then tapered off some on the next. The first day was spent driving the inner city and suburbs. The second day took us east and south into national parks and forests along narrow roads with sharp curves, surrounded by breathtaking views.

Seattle is a city of movement. Pedestrian traffic was heavy and bikers were everywhere. Some streets were rough and puddle filled, and bridge traffic was slow with endless lanes filled with long lines of cars.

NX offered great visibility, handled well in heavy traffic, and adapted superbly to the cosmopolitan atmosphere that is rich in northwest culture. Getting to restaurants, attending the theatre, and sidewalk experiences were greatly enhanced by the suave and determined sophistication of NX.

Stormy clouds at high elevation and coastal rolling fog in the valleys caused us to tread cautiously on the second day; but the NX held the road well, coming up with kick-tail speed promptly when required to pass slow traffic safely and smoothly. Seats were comfortable, music was capsuled in an easy listening format, and the glass roof allowed us to follow the tall trees in their reach for the sky.

Look for the Lexus NX at showrooms around the first of November 2014.