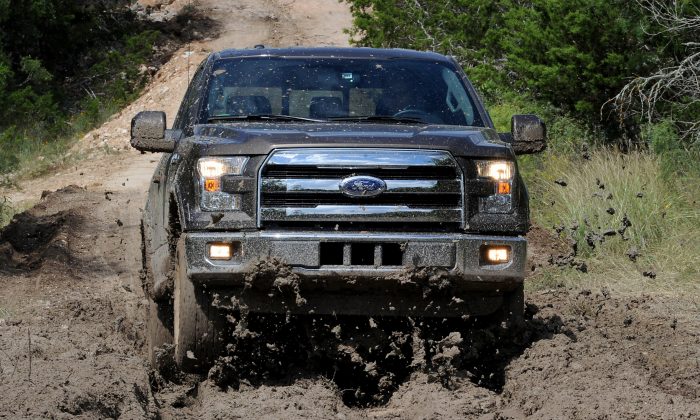 Historically, Ford has been known for its tough, durable engines that have the power to accomplish any purpose. The 2015 is no exception.

The all-new 2.7 L EcoBoost V6 engine with Auto Start-Stop reduces fuel consumption and delivers over 8,000 pounds of towing capacity made possible by its maximum output of 325 horsepower and 375 pound-feet of torque. Although this will be the engine of focus for this column, it is just one of several motors offered in the all-new F-150. The 3.5 L EcoBoost V6 is rated at 365 horsepower and 420 lb.-ft. of torque.

The 5.0 L Ti-VCT FFV V8 has a dual overhead camshaft (DOHC), lightweight aluminum cylinder heads with four valves per cylinder, and an aluminum engine block. Horsepower and torque numbers are officially rated at 385 horsepower and 387 pound-feet.

The new Ford F-150 is capable of hauling heavier loads than its predecessor, while offering a choice of two payload packages instead of one to get the job done. My test truck had Payload Package (622) for 2,000 pounds capacity.

Now this new truck has numerous new features that add to your comfort as well as value. The new Ford truck is first in its class with inflatable rear seat belts, a 360-degree camera with split-view display, active park assist, and remote tailgate release, just to name a few.

Inside the F-150 is wonderful. The 8-inch productivity screen in the instrument cluster shows all your gauges at a glance for easy viewing. The LED side mirror spot light adds to the safety of the mount and dismount, plus it helps to identify terrain and ground clearance quickly.

The redesigned cab is roomier because it is 2 inches wider than previous generation Ford trucks. There is increased hip and shoulder room as well as increased in-cabin storage. Durable seat fabrics and available heated steering wheel are additional appealing features.

The F-150 has a fully-boxed, high-strength, steel frame and military grade aluminum alloys in its body and bed. This new truck weighs 700 pounds less than its predecessor. Plus, it resists corrosion better than ever.

Just one example of the toughness is found in the boxed steel frame which includes more high-strength steel than previous generations—up from 23 percent to 77 percent. This enhances stiffness and durability while reducing weight. This toughness includes eight through-welded cross members to help provide outstanding reliance and torsional stiffness.

The standard gas tank is 23 gallons, but a larger 33 gallon fuel tank can be ordered. This tough truck, as mentioned earlier, gets up to 23 mpg highway.

Ford has more packages and equipment options than there are dresses in your Aunt Ruthie’s clothes closet. Everything from moonroof to fancy fender moldings. Ford promises—then delivers!

During trials, Ford provided their trucks to be tested against all competitors. Recently, at the Texas Truck Rodeo in San Antonio, Texas 60 auto journalists representing the Texas Auto Writers Association evaluated all new trucks. Trucks competed on both on and off road courses with ample opportunities to tow and carry heavy loads. The 2015 Ford F-150 was selected Truck of Texas, while Ford Trucks were selected the Truck Line of Texas.

Ford has something new and ingenious. The Dynamic Hitch Assist has a rearview camera enhancement that provides added driver convenience when hitching a trailer. It helps to line up the truck and trailer without requiring a spotter or having to get out of the vehicle. As you back up you are shown the projected path that guides the hitch into the trailer couple (for towing up to 5,000 pounds).

Then there is the Trailer Brake Controller which helps ensure smooth and effective braking with proportional output, based on the towing vehicle brake pressure.

Last year Ford made 647,697 F-150 pickup trucks in two of their plants. That is a truck every 49 seconds. The new 2015 Ford F-150 will be made in a new, especially designed, truck plant in Dearborn Michigan. Expect the new model to be in showrooms by the end of the year.

There have been some truck experts with doubts about Ford’s ability to produce a good quality truck made from so much aluminum. They cite possible repair and production problems. Some truck fans may take a wait-and-see attitude for a year or two.

Well, for what it is worth. I’m betting on Fields, Scott, and Ford.