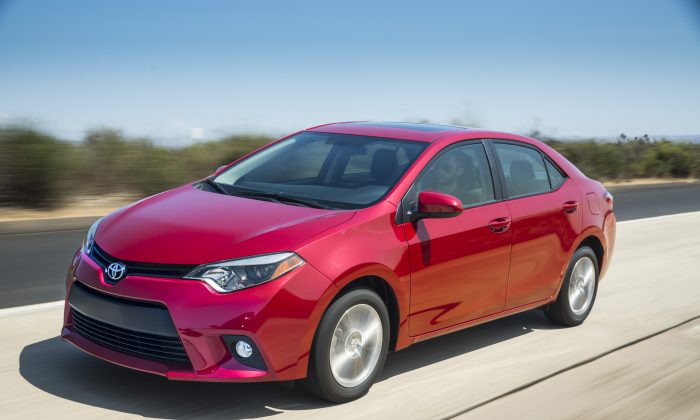 ‘It has a beat of its own’
By Durhl Caussey

This year Corolla will celebrate its 45th anniversary in the U.S. Nearly 10 million vehicles have been sold here since 1968. Over 4.5 million are still on the road today. Global sales are over 40 million, making Corolla the all-time best-selling car in the world.

Something most appealing to me was that 100 percent of all Corollas will be built in North America, in either the plant in Cambridge, Canada, or in the new dedicated plant in Blue Springs, Mississippi.

Corolla appears modern and dynamic with an athletic image. Its wide-open horizontal design helps to enhance that openness.

A new long wheelbase created the class-leading rear legroom. Soft-touch materials provide that comfort that goes along with that spaciousness. The features that my back enjoyed the most were the front seat’s new lumbar and bolster support that is both comfortable and stylish. The dash panel blends with the piano trimmed console, metallic trim surroundings, and shift boot.

Engineers wanted to enhance the inside experience and driving of the Corolla through features like standard Bluetooth, backup monitor, as well as next generation Entune Premium Audio with navigation, Apps Suite, and smart key. The new Apps Suite has expanded this year to include Yelp and Facebook Places.

Corolla has an economic pair of 1.8-liter engines that join with a new 6-speed manual transmission and an all-new Continuously Variable Transmission. This CVT will enhance the Corolla’s fuel-efficient new models by at least three miles to the gallon.

The 2014 Corolla brand will be represented by four trims. The Corolla L will be the entry-level trim. It begins at $16,800 and features standard LED headlamps and LED daytime running lights, Bluetooth, USB 2.0, and power windows.

The Corolla LE adds numerous other standard features. The starting price is $18,300, but includes the new CVT and Entune Audio with a 6.1-inch touchscreen. The integrated backup camera, auto climate control, and cruise control are all standard.

The LE Eco’s 1.8-liter engine with the Valvematic System is paired with the new CVT and produces 42 mpg gas consumption on the highway. The Eco has 140 horsepower while starting at $18,700.

The Corolla S is the premium trim starting at $19,000. Both the CVT and a new 6-speed manual transmission are available. Features include leather-wrapped steering wheel, sport fabric-trimmed seats, and an aggressive piano-black front grille that completes the Corolla package nicely.

All Corollas have the standard Toyota Care which provides two-year complimentary maintenance and 24-hour assistance.

“We are going to build a community by expanding the Corolla brand,” said Jack Hollis, Vice President, Toyota Marketing. “We are building relationships, broader and deeper, more than just a fine car. We expect the Corolla to inspire a new generation of young buyers, who are passionate, creative entrepreneurs under the age of 35.”

These are strong words form Hollis. But after all, Corolla is the number 1 compact with Hispanics at a 19.3 percent share, and African American buyers have a share of about 10 percent.

Hollis continues, “Corolla will be there for them as they get the new job, buy their first house, or start their first business.”

Corolla marketing is about connecting with a wide range of buyers, but in ways that are tailored to their media consumption habits.

“We have an emotionally charged car—it becomes a new style,” says Hollis. “We want our guests to connect. Corolla is the conduit. We are going to use many different channels like Yahoo, MSN, YouTube, and Hulu to make our message known.”

Driving the Corolla in the Great Northwest was a personal treat. Along the coast, through fertile fields, and along mountain tops, the Corolla truly became a great traveling companion. Its smooth ride, bucket full of amenities, power and maneuverability made what Hollis said understandable. “Corolla has a beat of its own.”