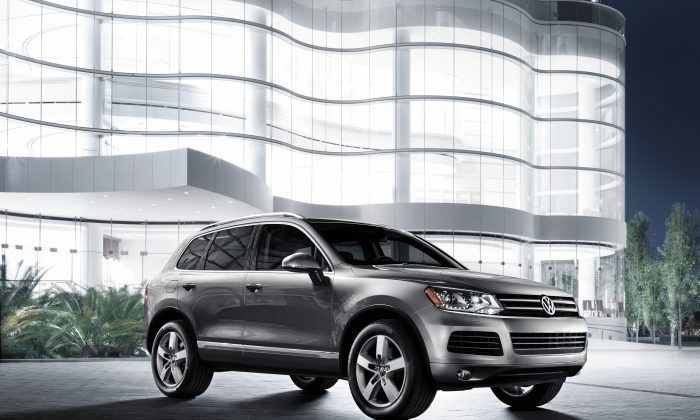 VW has built a premium and capable SUV. Touareg offers premium features, while sporting a chassis that can handle itself on the autobahn, interstates, city streets, or country lanes. It is dressed with a stylish, sophisticated SUV design.

Developed eight years ago, Touareg is still winning reviews and kudos from American auto writers. VW has blended a fuel-efficient engine with a remarkable, “Category-bending style.”

Fuel economy is rated at 20 mpg city and 29 mpg highway. I averaged 25 mpg, but felt fuel economy is an issue that VW needs considerable improvement on.

Keyless access with push-button start makes getting in and out quick and easy, while welcoming you to its silver metallic interior trim and cozy V-Tex leatherette seating surfaces. Front seats are heated and 8-way power-adjustable. Rear seats fold easily into a 40/20/40 split configuration.

Volkswagen is known for its safety credentials. Nine VW vehicles scored the highest ratings in all four IIHS qualifying tests in 2012. That is 36 instances of superior safety.

In addition to its numerous airbags, every VW has a specially reinforced safety cage, which is designed to help protect you in the event of a severe collision. Surrounding the cage are three crumple zones, which provide space and material to help cushion and absorb the impact for extra insulation.

I was surprised at how much room the Touareg had. The seats were plenty wide and comfortable. Front seat leg room was more than adequate, and the height adjustable telescopic steering column adds to driver comfort.

The Touareg was amazingly powerful for a diesel. Even in tight driving situations and power surge event needs, the vehicle handled well and appeared highly capable for the adventure. Touareg maneuvered me quickly out of harm’s way when quickness was most needed.

The vehicle had spirit and personality with a yearning to be driven. The price was $48,320.