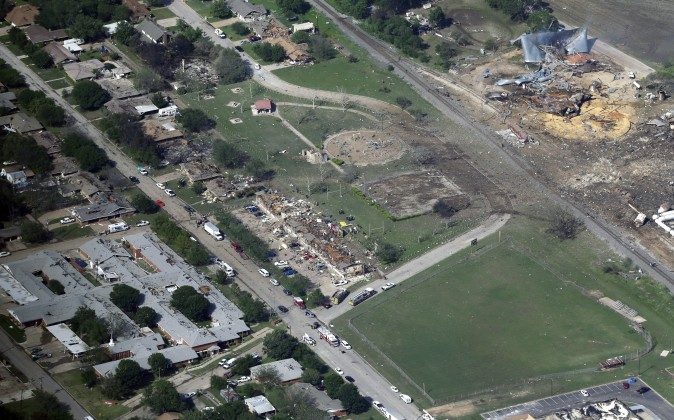 This April 18, 2013 aerial file photo shows the remains of a nursing home, left, apartment complex, center, and fertilizer plant, right, destroyed by an explosion at a fertilizer plant in West, Texas. Federal authorities announced Wednesday, May 11, 2016, that the fire that caused the deadly explosion in 2013 was a criminal act. The explosion killed 15 people, injured hundreds and left part of the small town in ruins. (AP Photo/Tony Gutierrez, File)
Crime and Incidents

An investigation concluded that the 2013 explosion of the West Fertilizer Co. in Texas was caused by a “criminal act,” according to officials from the Bureau of Alcohol, Tobacco, Firearms and Explosives (ATF).

The explosion that left 15 dead—including 12 first responders—and over 200 wounded, was ruled as “incendiary,” meaning the fire was purposely set, ATF Special Agent Robert Elders said in a press conference on May 11.

The agency is offering a $50,000 reward to help identify the perpetrator. According to NBC, there is an additional $2,000 reward, from the Waco-McLennan County Crime Stoppers program for the same information.

Elder said more than 400 interviews have been conducted as part of the investigation, yet no arrests have been made; and the bureau has ruled out all natural and accidental causes. A motive remains unclear.

West, Texas, is just a few miles north of Waco. The explosion destroyed the area’s farmland and demolished over 500 homes. Officials said the explosion was comparable to a 2.1-magnitude earthquake; the eruption left a hole nearly 100 feet wide at the side of the plant.

Lawsuits have been filed against the company, with many being settled outside the courtroom for undisclosed amounts.

Pending the criminal investigation, Elder said the agency is withholding a full report on the explosion, for fear it will jeopardize the integrity of the case.