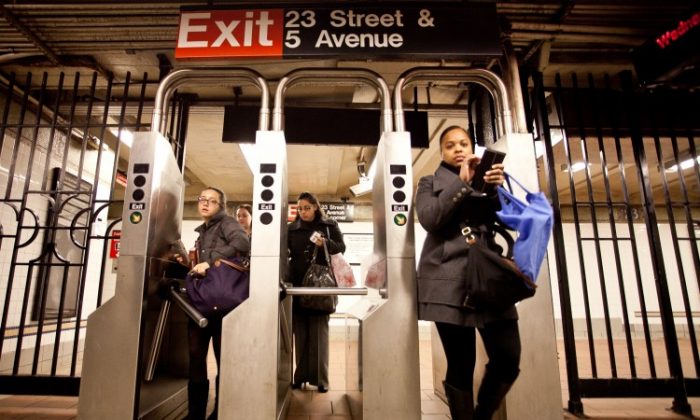 NEW YORK—Subway, bus, and rail fares will rise for the fourth time in five years in March. MTA board members almost unanimously approved the increases. The debt for the gigantic regional transportation authority is rising steadily—currently at about $32 billion—and debt service eats up $2.3 billion every year ($3 billion by 2016).

Labor costs, pensions, and the like are getting more expensive, and overall costs are growing faster than revenue, despite the subway being ridden more than any year since during World War II. The 2013-2016 budget relies on a labor agreement with no raises for three years, but negotiations appear at a standstill.

No ideas for new forms of revenue have come to fruition, the congestion charging plan having been shot down by the state in 2009. Four mega-projects, including the first phase of the Second Avenue Subway, are being paid for mostly with federal money or through borrowing. Hurricane Sandy ruined two parts of the system and set back the MTA another estimated $5 billion.

The agency is at a critical juncture, with board members and advocates saying something has to change. Joseph Lhota, chairman and CEO, announced he will step down at the end of the year to explore running for mayor, the sixth person (including interim replacements) to leave the position since late 2006.

At the same time, there have been slight improvements on some transportation fronts. Pushing back the fare hike to a March start date, the MTA also restored $29 million in service or added new service. And additions to rapid bus service, identified as a much cheaper way of expanding transit than expanding the subway system, have been made, including a route to LaGuardia Airport and a route on Staten Island.