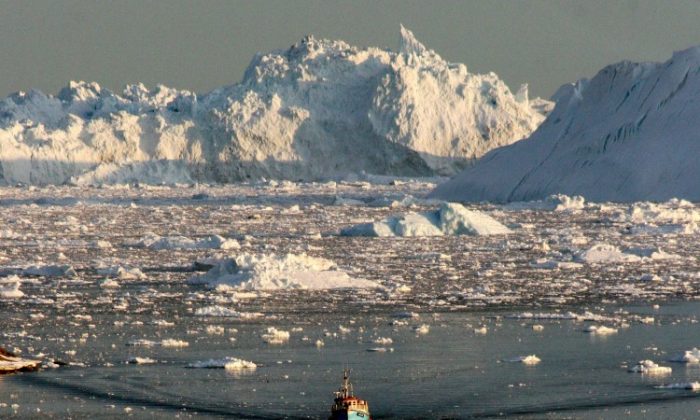 A boat skims through the melting ice in the Ilulissat fjord on the western coast of Greenland in August 2008. The effects of global warming in the Arctic are visible as Greenland's Ilulissat glacier melts at an alarming rate. (Steen Ulrik Johannessen/AFP/Getty Images)
International

A number of reports came out in 2012 further illustrating the loss of Arctic ice. The World Bank encouraged immediate action on the issue after a report it commissioned warned of more extreme weather events in coming years.

The European Environment Agency said drought in Southern Europe and heavy rain in Northern Europe are some effects that have already been seen on the continent.

World governments met in Doha, Qatar, in December to discuss climate change. No real progress or binding agreements were made, except for an extension of the 1997 Kyoto Protocol—the only worldwide agreement that is aimed at curbing greenhouse gas emissions. The second phase leaves out China and the United States, however, the two greatest emitters.

A report commissioned by 20 governments predicts that as many as 100 million people will be die as a result of climate change effects by 2030; The World Bank-commissioned report says the temperature will warm by an average of 7 degrees Fahrenheit worldwide by 2100.

In late 2013, the next, highly anticipated United Nations Intergovernmental Panel on Climate Change will release its forecast. Experts believe the report will be based on more sound data due to better models and technology, reported German publication Der Spiegel.