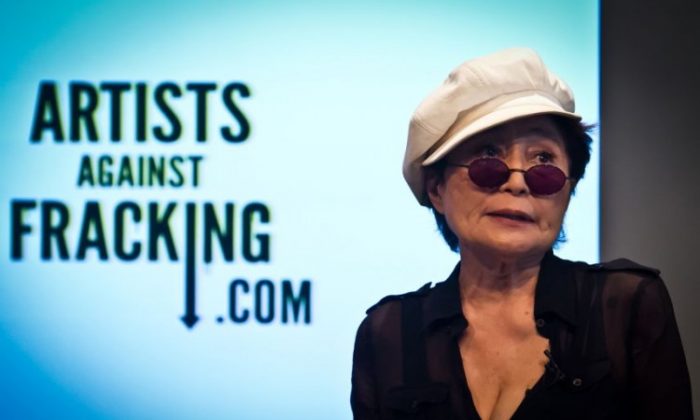 Yoko Ono speaks at the Artists Against Fracking Coaltion Event at Paley Center For Media on August 29, 2012 in New York City. (Photo by Mike Coppola/Getty Images)
US

2012 and Beyond: Moratorium on Fracking in NY Survives Another Year

NEW YORK—The debate on hydraulic fracturing, otherwise known as fracking, 2013 will open up much like 2012—with yet another public comment period.

New Yorkers have until Jan. 11, 2013, to voice their position on fracking, the method of obtaining natural gas by blasting a mixture of water, sand, and chemicals into the ground.

This year, environmental groups concerned with the effects the controversial practice has on the environment, as well as the gas companies, hoping to tap into the bountiful gas miles below the New York State shale, anxiously awaited a decision—it never came.

As the months ticked by with no decision, the public outcry bubbled over and a debate that was once centralized to environmentalists or the locals affected by the practice, exploded onto the national scene.

In September, Yoko Ono and John Lennon’s son Sean Lennon formed Artists Against Fracking, a group of music and film stars who oppose the practice. Matt Damon, will star in a film called “Promised Land,” which depicts the decisions small towns face when choosing to let fracking into their region.

Not all the response was against fracking. In August Mayor Michael Bloomberg gave his support to safe fracking, donating $6 million from Bloomberg Philanthropies, his personal charitable organization. The issue hit the presidential debates, with both candidates supporting fracking, saying it will provide jobs and a decreased reliance on foreign oil.

With the increasing demand for natural gas getting harder to ignore, Governor Andrew Cuomo will, once again, face a tough—and politically slippery decision—in 2013 regarding hydraulic fracturing. Lifting the moratorium, which has been in place since 2008, before he took office, could alienate a large, and growing, contingent who feel the practice cannot be done safely. Keeping the ban could disaffect the gas industry, which has already grown tired of waiting, especially as gas prices continue to plummet.

The New York State Department of Environmental Conservation, the agency charged with providing data to Cuomo, expects a heath review by February and a decision soon after.