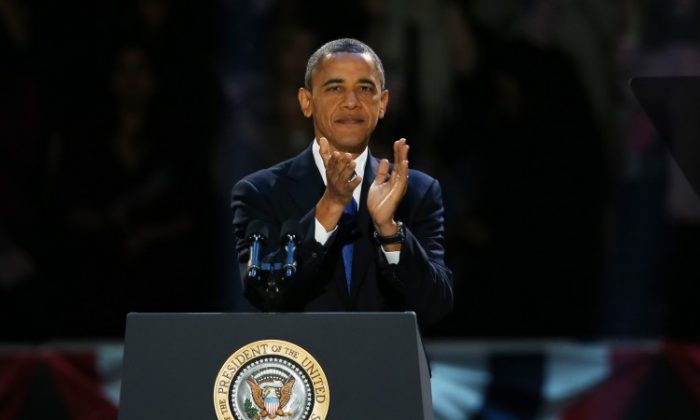 U.S. President Barack Obama on stage to deliver his victory speech on election night at McCormick Place on Nov. 6, 2012, in Chicago, Ill. Obama campaigned hard and won, but with a Republican House and Democratic Senate, Congress remains divided. (Scott Olson/Getty Images)
US

WASHINGTON—Although not as close as first predicted, it was a hard-fought battle between incumbent Barack Obama and former Gov. Mitt Romney (R-Mass.) for the 2012 presidential election.

Obama won soundly, securing a second term with 332 electoral votes—well in excess of the 270 required for re-election as president—and he surpassed 51 percent of the popular vote. He also won, although narrowly, eight out of the nine battleground states.

Election results show that political divides do still exist, and an insight into future dealings could be found in the success or failure of the end-of-year “fiscal cliff” negotiations—a set of tax hikes and spending cuts set to go into effect Jan. 1.

As discussions for a deal stalled between House Speaker John Boehner (R-Ohio) and President Obama, the opportunity may be present for Senate Majority Leader Harry Reid (D-Nev.) and Senate Democrats to take the lead. At this stage, any package that can be agreed upon will be seen more as a scaled-down “patch” rather than a comprehensive deal addressing the fundamental problems.

With an election now behind them and Congressional power divided between a Republican House and a Democratic Senate and executive branch, both parties will need to work together over in order to avoid political gridlock in 2013.