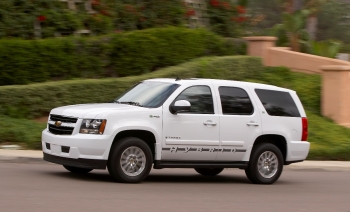 By Durhl Caussey
Print
As most of us know, hybrid technology uses an electric motor or motors to help the combustion engine perform and reduce fuel consumption. When the vehicle is stopped or traveling slowly, usually under 50 km per hour, and then the electric motor powers the vehicle, resulting in zero emissions. After a certain speed, the gasoline engine takes over. The vehicle starts with the electric motor, and moves to the gasoline-powered engine as speed accelerates. When running on the battery, the engine starts so quietly it is difficult to know it is really on.

The Tahoe has a two-mode motor (dual electric motors in the transmission) , that helps it gain its 332-horse power, 6-liter V-8 engine to encourage the 2600 kg vehicle to run smoothly. The new fitted GM cylinder deactivation system helps to cut the engine back to four-cylinders when moving slowly or slowing down. The Tahoe also has a regenerated braking system that captures some of the energy lost when braking and uses it to recharge the battery.

I averaged 10.7 L/100 km whether driving in the city or on the highway during the two weeks I drove the Tahoe. This places Tahoe on about the same mileage plain as the new Dodge and Chrysler Hybrids.

The reason Hybrid Tahoe costs more than some of its competitors is because of the many additional features you get. Front leather bucket seats that can be heated, and an extended 8-year/160,000 km warranty along with the Hybrid warranty. The hybrid appears strong and stout and is loaded with power seats, locks, and a theft deterrent system.

Navigation system, XM satellite radio, Bose Premium speaker system, rearview camera, and the Driver Information System are features that are not found in competitive models that sell for thousands less.

Drop in towing capacity from 3,620 kg on the regular Tahoe to 2,812 kg on the hybrid may be a sacrifice, but other car companies are having the same experience.

Hybrid Tahoe is a luxury truck that keeps all the amenities found in the regular Tahoe, but uses a whole new concept in engine design.