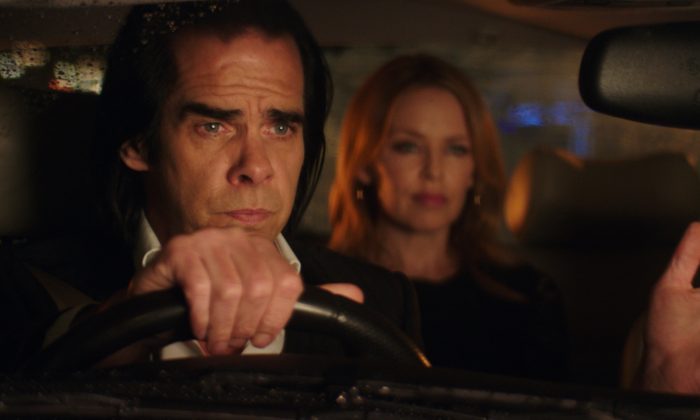 As the reigning poet laureate of hard rock, Nick Cave was the perfect voice to narrate Eddie White and Ari Gibson’s animated noir fable, “The Cat Piano.” He is also a screenwriter of some note, whose credits include John Hillcoat’s “Lawless.” The standard talking head and archival footage approach simply would not suffice for Cave, given his cinematic presence and relentlessly idiosyncratic aesthetic sensibilities. However, Iain Forsyth and Jane Pollard (with the knowing collusion of their subject) took an entirely different tack in “20,000 Days on Earth.”Ostensibly, the filmmakers will follow Cave throughout what will be his 20,000th day of terrestrial life, but they are not slavishly attached to the conceit. Instead, they are content to follow Cave as he develops the next Bad Seeds album and confronts some of the ghosts from his past in eccentrically stylized dramatic interludes. Former Bad Seed Blixa Bargeld will reveal why he really left the band, which would be a bit of a dramatic letdown, if it did not segue into Cave’s somewhat neurotic theory of songwriting.In these sequences, “20K” is more like performance art than a documentary, providing a platform for Cave’s acting chops when he essentially plays himself. Kylie Minogue also gets into the spirit of things when her reminiscences of their unlikely collaboration segue into a meditation on mortality (from the back seat of Cave’s car, bringing to mind her strange appearance in “Holy Motors”). It is also appealing to watch the musical camaraderie shared by Cave and Warren Ellis, who clearly emerges as first among Bad Seeds not named Nick Cave.It is hard to say whether “20K” is better appreciated by Cave fanatics or newcomers arriving with a blank slate. This is absolutely not a greatest hits package, somewhat focusing on the creation of the “Push the Sky Away” album, but mainly just giving Cave a venue for his insights into the music-making process. Those who are interested in questions of method will find many of the sequences fascinating. It should also bolster the reputation of strict Freudian Darian Leader, who is not really Cave’s analyst but elicits some vivid memories of the singer’s late father.“20K” is about as multi-hyphenated as a hybrid documentary can get, but it keeps the stream of interesting stories flowing unabated. Ironically, Ellis probably has the most telling anecdote, suggesting that the often-violent spectacles that used to accompany Bad Seeds gigs were nothing compared to the force that was Nina Simone. (Just try to top her.)Yet, it must be granted that Cave is enormously compelling appearing as himself, playing himself, or something like that. Fittingly, he now lives in Brighton, where he could pass for a gangster from Brighton Rock with dark suits and menacing swagger. It still seems to kill on stage, and it works on camera surprisingly well. Highly recommended for those who appreciate meta-documentaries, “20,000 Days on Earth” opened Wednesday, Sept. 17, at New York’s Film Forum.Joe Bendel writes about independent film and lives in New York. To read his most recent articles, please visit www.jbspins.blogspot.com