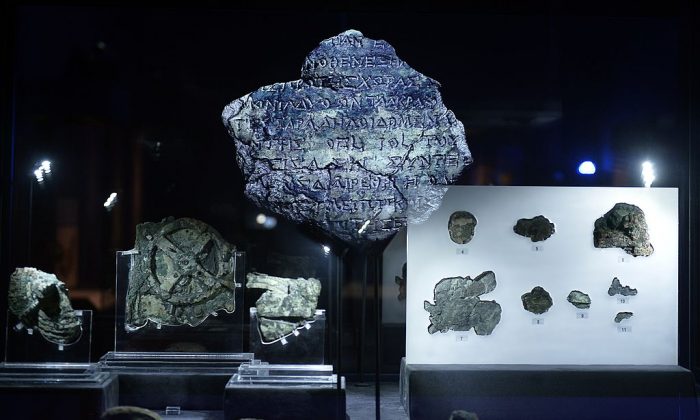 Artifacts found at the so-called Antikythera shipwreck off a remote Greek island in 1900, as displayed at the Archaeological Museum in Athens on Sept. 14, 2014. The remains of a young man who was on the ship 2,000 years ago were found on Aug. 31, 2016. (Louisa Gouliamaki/AFP/Getty Images)
archaeology

Underwater archaeologists made an extremely rare discovery at the world-famous Antikythera shipwreck site in Greece—the 2,000-year-old remains of a young male. And now scientists are hopeful they may be able to carry out the first ever DNA sequencing from an ancient shipwreck victim.

The Antikythera wreck, located off the island of Antikythera in the Aegean Sea, is a famous underwater archaeological site thrown into the spotlight in 1900 when researchers discovered an incredible mechanical device, now known as the Antikythera mechanism.

The metallic device consists of at least 30 different types of gears and is so complex that many consider it to be the first human-made analogue computer. After decades of research, scientists were able to determine that it shows the positions of the sun, moon, and planets as they move through the zodiac, predicts solar and lunar eclipses, and even marked key events such as the Pan-Hellenic games.

Along with the discovery of this unique form of ancient technology, archaeologists have found other treasures, including finely carved bronze and marble statues, glassware, jewellery, a bone flute, game pieces, and coins.

Now, according to Nature.com, researchers have made another significant finding with the recovery of a partial skull, two arm bones, several ribs and two femurs from a man in his late teens to early 20s. The skeleton was found buried under around two feet of pottery shards and sand.

He was trapped on board when the ship went down, The Guardian explained. The ship hit rocks, bashed along an undersea cliff and became buried in sediment.

Over the decades, divers attempted to investigate the ancient shipwreck, but dangerous conditions caused by the extreme depth of the submerged vessel hampered the investigation.

However, in recent years, scientists have used high-tech equipment, such as a robot exo-suit, to explore the shipwreck site, allowing new discoveries to be made.

Considering the fact that they have laid on the sea floor for over 2,000 years, the bones are very well preserved, giving scientists hope that they will be able to extract DNA for the first time from an ancient shipwreck victim.

Nature.com reports that within just a few days of the discovery, Hannes Schroeder, an expert in ancient DNA analysis from the Natural History Museum of Denmark in Copenhagen, arrived in Greece to assess whether genetic material could be recovered from the remains.

Sorting through the fragments of bone, Schroeder discovered petrous bones, which are bones behind the ear that preserve DNA even better than the teeth. Now the scientific team is waiting for permission from the Greek authorities before beginning work on the DNA extraction and sequencing.

Only a handful of human remains have been found on ancient shipwrecks, as most skeletons are washed away, decay, or are eaten by fish. The archaeologists are now hopeful that a DNA analysis will enable them to learn more about the people that were aboard the 1st century B.C. ship.