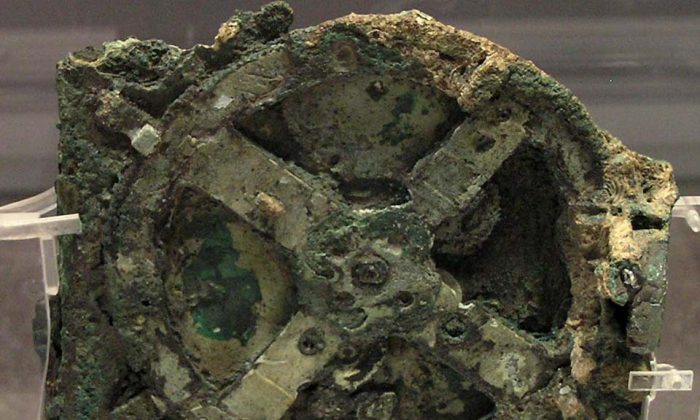 The Antikythera Mechanism is a 2000-year-old mechanical device used to calculate the positions of the sun, moon, planets, and even the dates of the ancient Olympic Games. (Wikimedia Commons)
Beyond Science

In the early 1900s, divers looking for sponges in the Antikythera area between Crete and Greece came upon one of the most mysterious discoveries the world has ever seen—the Antikythera Mechanism.

The device was being carried on a Roman ship that was wrecked between 80 and 60 B.C. The ship was believed to have been sailing to the Anatolian Peninsula (also called Asia Minor) to what is now Turkey and was carrying some of the finest works of art of its day. The divers found over 200 amphorae, or ceramic jars, which were still intact on the sea floor.

After the device was found, it wasn’t until 50 years later that an Australian archaeologist using X-rays began to discover that there was a lot more to the mystery piece than was originally thought. However, due to limited technology at the time, the actual function of the Antikythera Mechanism wasn’t known until decades later.

In 2005, using sophisticated software and technology, it was finally discovered that the Antikythera Mechanism was an astronomical device, and by using it, one could navigate one’s position at sea by charting the stars in the skies.

It was also an astrological device. By setting it to a particular day, such as a person’s birth date, one could see how the stars and planets would line up for that person. Using it as a timeline, one could then tell that person’s future by looking at the planets’ alignment for decades to come.

The device could also predict lunar phases, lunar eclipses, and the positions of the sun and moon for years to follow. Later it was also found that the device could predict the motion of the planets, and cast horoscopes for planning future festivals and events in the ancient world.

Mathias Buttet, director of Research and Development at the Swiss watchmaking company Hublot, said, “It includes ingenious features which are not found in modern watchmaking.” Buttet has managed to recreate a smaller version of the device the size of an average wrist watch.

Altogether, the Antikythera Mechanism used about 30 gear wheels, with very sophisticated and intricate parts that all interconnect. Researchers are still not sure who created the device or what its true purpose ultimately was.

The Antikythera Mechanism, along with other artifacts found at the shipwreck, can be viewed at the exhibition “The Antikythera Shipwreck: the Ship, the Treasures, the Mechanism,” which will continue to run at the National Archaeological Museum in Athens, Greece, from now through Aug. 31, 2013.