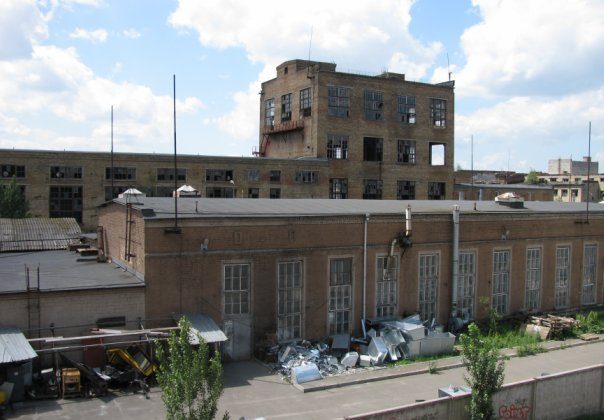 JSC Radical factory in Kyiv, Ukraine, where tons of mercury is exposed to the open air and has also seeped into the ground and debris onsite. (Courtesy of Oleksiy Batchenko/oleksiy-b.livejournal.com)
Europe

KYIV, Ukraine—Surrounded by residential buildings and trade centers, an abandoned factory in Ukraine’s capital city contains 200 tons of mercury that is slowly evaporating and spreading through the city.

Many people in the area have no idea.

“No, I haven’t heard,” said Artur Belskyi, who has lived less than a mile from the factory for the past 14 years, when asked if he had heard about the mercury at the old JSC Radical factory. The factory operated from 1952–1996. It was built just outside of the city after World War II, but Kyiv has expanded and enveloped the factory since then.

The municipal government had plans to clean it up, as it is a harmful substance, but scrapped the plan due to budget shortfalls for 2013.

Kyiv citizen Oleksiy Batchenko first brought attention to the contaminated factory in 2009. One day while walking by, he was curious and decided to take a closer. He took photos and made videos of mercury exposed to the open air. It shocked Ukrainian citizens at the time and got media attention.

“It seems that again nobody cares,” Batchenko said. Aside from the dealers who gather mercury from the site for sale, people don’t pay much attention to the issue anymore, he said.

Recently, Batchenko walked across the abandoned grounds and saw debris and old equipment soaked in mercury—forming puddles that evaporate into the open air.

In response to questions from The Epoch Times, Kyiv’s municipal government said there are about 200,000 tons of waste products containing mercury at the site.

Ecologist Denys Pavlovskyi, a coordinator of chemical projects for the ecological organization MAMA-86, clarified that there are only 200 tons of mercury exposed to air; the 200,000 tons of waste products containing mercury include equipment, the ground, materials used in the factory, and the concrete floor.

To describe the damage mercury in the quantity found at the abandoned factory could do, Pavlovskyi explained the effect the small amount of mercury in a common fluorescent light bulb could have.

“We can imagine, what is happening with 200 tons of mercury vapor,” Pavlovskyi said.

The health affects of mercury vapor include impaired vision and hearing, as well as neurological disease. The mercury can also get into ground water, added Pavlovskyi, making its way into crops.

The city had allocated $16.5 million (134 million hryvnas) in its 2013 budget for cleaning up the mercury waste at the site.

The Ukrainian Ministry of Finance reported at the end of 2012, however, that federal budget cuts would not allow it to give Kyiv money for this cleanup. A plan to remove the mercury is included in a 2013–2017 federal ecological program.

Within about a half-mile radius around the factory site are two large trade centers and a subway station.

The factory was considered one of the chemical giants of the USSR. It produced chlorine, caustic soda, sulfuric acid, and hydrochloric acid not only for the USSR, but also for export to many countries in Europe. Due to the health risks of exposure, employees were limited to eight years of work at the factory. In the mid-1990s, JSC Radical went bankrupt.

Today, the dangers of mercury are recognized around the world. This year, representatives of 140 countries in the United Nations supported a Global Mercury Agreement aimed at controlling and reducing the use of mercury.

The agreement is also known as the Minamata Convention. It is named after a city in Japan where mercury pollution caused serious damage to human health in the mid-20th century.