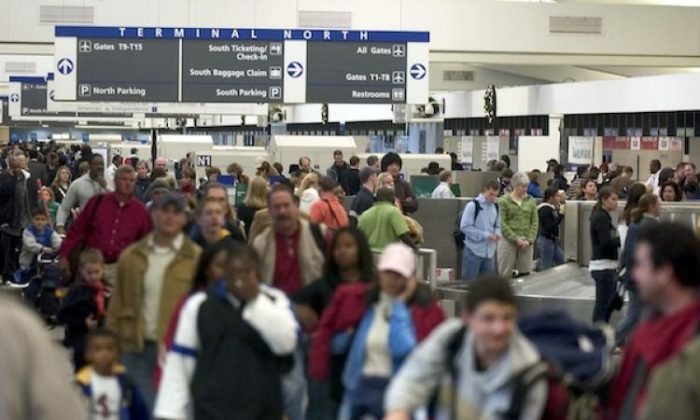 200 People Traveling Through Atlanta Airport in Self-Quarantines for Coronavirus: GM

The general manager of Atlanta’s Hartsfield-Jackson Airport said that around 200 travelers who went through the airport showed possible symptoms of the COVID-19 coronavirus and were told to self-quarantine at home, illustrating how U.S. airports are scrambling to try and contain the spread of the virus.

The U.S. Centers for Disease Control (CDC) is involved in the self-quarantine effort, said Hartsfield-Jackson International Airport’s General Manager John Selden, who provided the first update since federal officials asked airports to start checking for potential coronavirus cases from Chinese travelers. All of those who were checked didn’t have to be taken to the hospital, he added.

Of the more than 1,000 passengers who were screened, one traveler from South Korea was in critical condition and had to be taken to the hospital, he said, reported Fox5 in Atlanta. That person didn’t have coronavirus and was released three days later.

“Atlanta is in good shape,” Selden told the station. “And nationwide there has been only one person who has come through a U.S. airport with the virus.”

More screenings are taking place beyond flights that originate in Asia, Selden said, noting that the virus is spreading in a number of other countries outside of China, where the virus is believed to have originated late last year and sickened tens of thousands in the country.

On Tuesday, a high-ranking CDC official said she believes the COVID-19 outbreak will morph into a pandemic, and the United States will likely see community transmission of the virus.

“Widespread transmission of COVID-19 in the United States would translate into large numbers of people needing medical care at the same time,” Dr. Nancy Messonnier, the director of the National Center for Immunization and Respiratory Diseases, told reporters. “Schools, childcare centers, workplaces, and other places for mass gatherings may experience more absenteeism. Public health and healthcare systems may become overloaded, with elevated rates of hospitalizations and deaths.”

Fears about the economic fallout from the outbreak have triggered a sharp sell-off of stocks, wiping out gains over the past several weeks. On Monday, the Dow Jones Industrial Average closed 1,000 points lower.

Secretary of Health and Human Services Alex Azar, who appeared before a congressional committee on Wednesday, said that two more passengers evacuated from the Diamond Princess cruise ship are confirmed to have contracted the virus. The Diamond Princess has been held in isolation off the coast of Yokohama, Japan, prompting the United States and other countries to evacuate their citizens.

Later, Azar told another committee that he was informed of another confirmed case, bringing the total of U.S. cases to 60.

Several states, meanwhile, have publicly confirmed that health officials are monitoring hundreds of people who have shown possible coronavirus symptoms. They include Washington state, Oregon, and Michigan.

President Donald Trump will hold a news conference Wednesday at 6 p.m. along with CDC officials to discuss COVID-19.