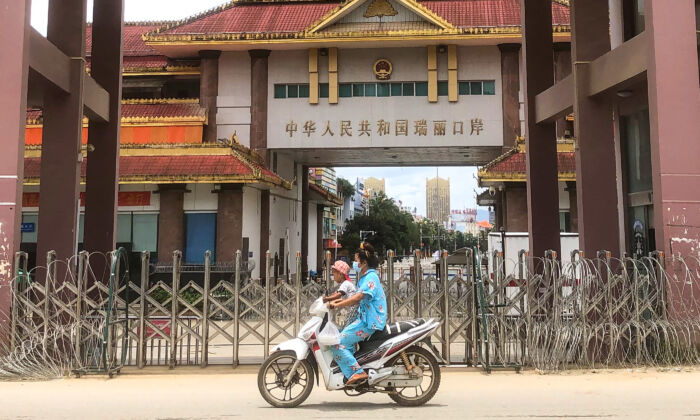 A woman and child ride a scooter past the China-Myanmar border gate in Muse, Burma on July 5, 2021. (STR/AFP via Getty Images)
INSIDE CHINA

Workers in China’s gateway to Burma (also known as Myanmar) in Yunnan Province have been left struggling to make ends meet as a result of a prolonged COVID-19 lockdown.

Some said both their hopes and savings have been drained since the city started its restrictions in late March.

“I filled out a lot of [application] forms but only received 1 pound of rice [from the local government],” one netizen in Ruili city wrote.

The city of Ruili has had on-again, off-again lockdowns due to sporadic CCP virus outbreaks since last year, as local authorities attempt to stamp out new infections.

Since March 29, local authorities have imposed strict measures after a new virus flare-up. The border city has been a marketplace for jade jewelry for a long time. Now, shops are shut down, trade is suspended, and unemployment has surged to the highest in a decade in the once-lively city.

Lin Quan (pseudonym), a Sichuan jeweler who sells bracelets in Ruili, has not earned a penny since that date. He told the Chinese edition of The Epoch Times that he can only live on overdraft or borrow money from family members.

“The stalls and stores there have been closed, and all deliveries halted. How can you do business? … How do you think you can make a living?” Lin said. “About 90 percent of the stores had to close. They can’t hold on.”

When state-owned media CCTV earlier broadcast online images of the city, the screen was filled with local netizens crying for help, according to Lin. The live stream was later halted.

“That is the reality in Ruili, the [loss of] livelihood in the whole small city—cries of complaint fill the streets.”

The owner of a local barbershop, Cheng Hao (pseudonym), told The Epoch Times that his business has been closed for seven months. “And I was living on my savings. … If you have a mortgage, car loan, without any income, there is absolutely no way to live.”

The county-level city is suffering from a once-in-a-lifetime catastrophe, said Dai Rongli, the former vice mayor of Ruili. “A small town should be given more care in place while being given more responsibility,” Dai said in an Oct. 28 social media post.

“The strapped finances, the exhausted manpower, as well as the daunting gateway city responsibility, make this small town unable to bear the weight any longer,” the article reads, while flagging that the central government should take responsibility.

“Not only are the people without any income collapsing, but public servants have also collapsed, feeling they are doing useless work,” Cui Yingzi (pseudonym), a resident of Ruili, told the Chinese edition of The Epoch Times on Oct. 28.

“My niece, who is under two, has had almost 50 nucleic acid tests. She is still so young,” Cui said.

Yet the city’s propaganda department denies there is a full lockdown, calling it “a period of strict control,” state media reported on Oct. 28. “The people have no problems with supplies and livelihood security,” a spokesman told the media.

Lin said officials are whitewashing the hardships of the people, calling the government’s briefing “a mere formality.”

Across China, the year-on-year gross domestic product growth in the third quarter hit a year low at 4.9 percent, according to official data released earlier this month. The nationwide factory activity also shrank in September for the first time since February 2020.

Gu Xiaohua and Gu Qinger contributed to this report.