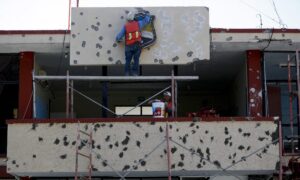 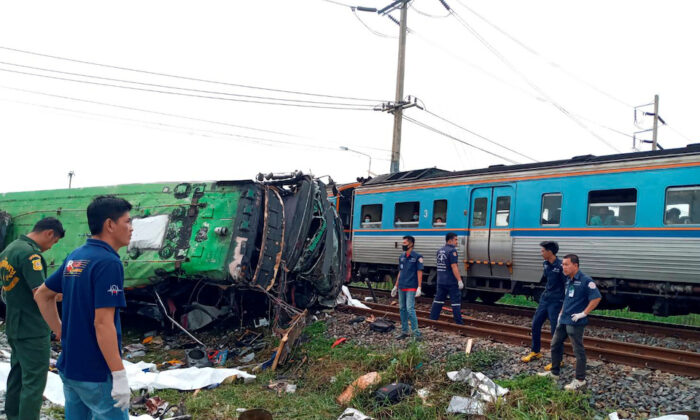 Rescue workers stand at the crash site where a train collided with a paseengers bus in Chacheongsao province in central Thailand on Oct.11, 2020.(Dailynews via Reuters)
Asia & Pacific

20 Killed on Temple Trip in Thailand as Bus, Train Collide

BANGKOK–A bus heading to a Buddhist temple collided with a train in central Thailand on Sunday, killing at least 20 people and injuring 30, authorities said.

A tour bus carrying some 60 factory workers on their way to a Buddhist ceremony at a temple was crossing a railway track when it was hit by a freight train headed to the capital from the east of the country.

The bus was flipped on its side and the top ripped off, with debris and metal scattered around the accident area, images from rescue workers showed. The train remained on the rails.

Governor Maitree said the crossing has an alarm but does not have a barrier to block traffic when a train is coming. He said the province will install speed bumps and barriers as well as cut down trees near the crossing to improve visibility.

“Let this case be a lesson, and we will make improvements at risky spots so such accidents will not take place again,” Maitree said in a statement.

Thailand’s roads rank among the world’s deadliest, according to the World Health Organization. There has been little improvement despite safety campaigns over the years.

The bus passengers were traveling from Samut Prakan province to a Buddhist temple in Chachoengsao for a merit-making ceremony marking the end of the Buddhist Lent.