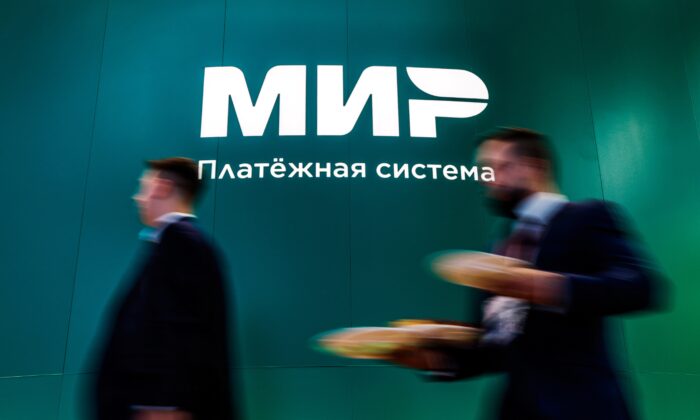 ISTANBUL—Turkish lenders Isbank and Denizbank have suspended use of the Russian payment system Mir, the banks said on Monday, following a U.S. crackdown on those accused of helping Moscow skirt sanctions over the war in Ukraine.

The moves, announced separately, came after Washington expanded its sanctions last week to include the head of the entity running Mir, which is popular with the tens of thousands of Russian tourists who arrived in Turkey this year.

Isbank, whose shares tumbled 10 percent on Monday, said it halted Mir payments and is evaluating the U.S. Treasury’s new sanctions. Isbank also said it was keen to comply with national and international laws, regulations, and commercial business principles.

Asked for comment, Denizbank said: “We are currently unable to provide service” in Mir. The bank “acts in accordance with international sanction regulations,” it had said earlier on Monday.

NATO member Ankara opposes Western sanctions on Russia on principal and has close ties with both Moscow and Kyiv, its Black Sea neighbors. It also condemned Russia’s invasion and sent armed drones to Ukraine as part of its diplomatic balance.

Yet Western nations are growing concerned over increased economic ties between Turkey and Russia, diplomats say, particularly after several meetings between leaders Tayyip Erdogan and Vladimir Putin, including last week in Uzbekistan.

Turkey’s Finance Minister Nureddin Nebati at the time called concerns over the letter “meaningless.” In April, he said Russian tourists—critical to Turkey’s economy—could easily make payments since the Mir system was growing among Turkey’s banks.

Many Russians have gone to Turkey since the February invasion left them few other travel options, and sanctions cut off their use of major U.S. credit cards.

Russia calls its actions in Ukraine “a special military operation.”

After the two private lenders suspended Mir, it is still operated by state lenders Halkbank, Vakifbank, and Ziraat.

The steps by the U.S. Departments of Treasury, Commerce, and State were designed to hold the Russian government accountable for its Feb. 24 invasion and continuing war against Ukraine, U.S. Secretary of State Antony Blinken said in a statement.

Ukrainian forces have made major gains this month, advancing in the Kharkiv region and driving Russian soldiers from the city of Izium, dealing Russian troops their worst defeat since they were repelled from the outskirts of the capital Kyiv in March.

“The United States will continue to take actions against those who support Russia’s defense-industrial base, its violation of human rights, and its attempts to legitimize its occupation of Ukrainian territory,” Blinken said.

The Treasury said it blacklisted 22 individuals, including four financial executives whose actions could directly or indirectly support Russia’s war effort by helping it evade financial sanctions imposed on Russia after the invasion.

The U.S. Treasury also sanctioned Maria Alexeyevna Lvova-Belova, a Russian official it said had led Moscow’s efforts to deport thousands of Ukrainian children to Russia. It also put new sanctions on Chechen leader Ramzan Kadyrov, who has mobilized Chechens to fight in Ukraine, and seven members of his family.

A full list of those sanctioned by the U.S. Treasury can be found here. As a result of the sanctions, access to any of their property that falls under U.S. jurisdiction is blocked and U.S. persons are generally barred from transactions with them.

In addition, the Treasury said it would bar U.S. persons from providing quantum computing services to anyone in Russia from Oct. 15. This step was taken in coordination with the Commerce Department, which imposed controls on exports of quantum computing-related technology.

The Commerce Department also expanded sanctions to add items useful for Russia’s chemical and biological weapons production and needed for advanced manufacturing in a number of industries.

The State Department said it had imposed sanctions on 22 “Russian proxy officials,” five for allegedly helping to steal Ukrainian grain and 17 for aiding in Russia’s occupation of Ukraine. It also put new sanctions on the GRU Russian military intelligence agency for aiding forced deportations from Ukraine.

It also sanctioned a string of Russian groups, including three engaged in military space activities, 13 in advanced technology that contributes to Russia’s defense industrial base, and 14 involved in sophisticated electronics.

Russia’s central bank on Friday pledged to keep expanding the number of countries that accept its Mir bank cards.