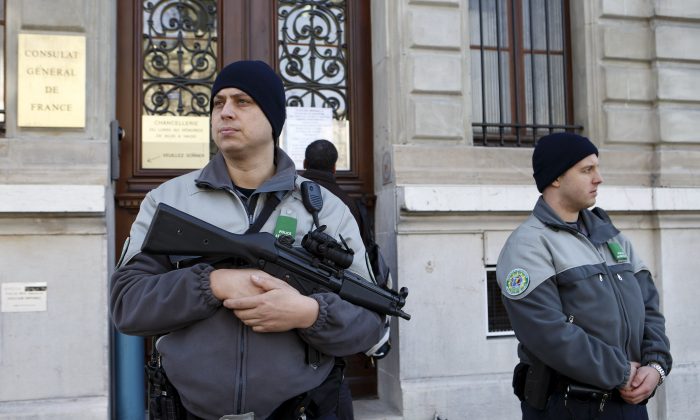 Security officers control the area in front of the French consulate due to a high level of alert, in Geneva, Switzerland, Friday, Dec. 11, 2015. (Salvatore Di Nolfi/Keystone via AP)
Europe

Two Syrian nationals were arrested on December 11 in Geneva and police found traces of explosives in their car.

The news was told to the Tribune de Genève by sources. Broadcaster RTS also made a similar report, without citing its source.

There has been no official confirmation as of yet, and Geneva security department spokeswoman Emmanuelle Lo Verso declined to comment.

It’s unclear as of yet whether the men were linked to the heightened terror alert.

The arrests came after Swiss police increased the terror alert in Geneva due to intelligence that indicated four men suspected of involvement in the recent Paris terror attacks had arrived in the city.

A security guard at the United Nations headquarters, equipped with an MP5 sub-machine gun along with his fellow guards in a highly unusual move, told Reuters that Swiss authorities were searching for the “four guys” as part of a Europe-wide investigation.

“The Geneva police, on the basis of this information, have increased their level of vigilance and reinforced the number of police agents on the ground,” the Geneva department of security added in a statement.

A source told CNN that the men–five in their report–were believed to be part of Mourad Fares’ network. Fares, a French national, recruited one of the Paris attackers, the source said. U.S. officials are believed to have provided the intelligence to the Swiss.

At least one of the suspects in the Paris attacks–Saleh Abdeslam–is still on the run. Geneva daily Le Temps reported that a friend of Abdeslam was spotted in a van by Geneva police earlier this week.