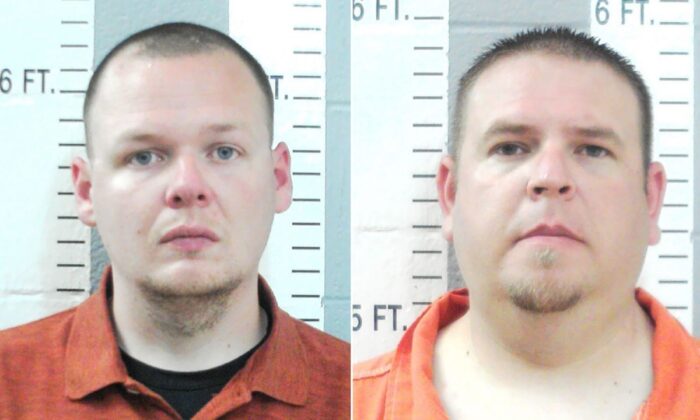 Officers Joshua Taylor (L) and Brandon Dingman of the Wilson Police Department in Oklahoma were charged in the death of Jared Lakey. (Courtesy of Oklahoma State Bureau of Investigation)
US News

Two Oklahoma police officers were convicted of second-degree murder on Friday in the Taser death of a 28-year-old man in July 2019, authorities report.

Prosecutors said the repeated use of the Tasers was “dangerous and unnecessary” during the pair’s encounter with Jared Lakey on July 4, 2019.

The former officers Joshua Taylor, 25, and Brandon Dingman, 34, with the Wilson Police Department, each received a sentence of 10 years in prison according to reports by the Washington Post.

The combined use of Tasers more than 50 times “greatly exceeded what would have been necessary or warranted by the attendant circumstances” according to court documents obtained by the New York Times.

The jury in Carter County found the two men guilty of assault and battery with a dangerous weapon. The pair are scheduled to be sentenced Dec. 2.

“The Lakey family is grateful to the jury and the District Attorney for the convictions, but the risk to the public remains,” Spencer Bryan, attorney to the Lakey family, told the Washington Post in a statement.

The civil rights lawsuit filed by the Lakey family said Lakey’s body was riddled with marks from the Taser shots and that Lakey died of a heart attack after suffering from more than one.

According to CNN affiliate KXII, the trial began on Tuesday. Five witnesses attended the trial, including Oklahoma’s Chief Medical Examiner and a Carter County Deputy.

The two former officers responded to a call about a “naked man screaming and running down the street,” and tried to restrain Lakey who reportedly did not obey their commands.

Oklahoma’s chief medical examiner reportedly said that the combination of Lakey’s heart condition and the officers’ use of electrical weapons and restraint ultimately led to his death.

In a Wednesday testimonial, Wilson Police Chief Kevin Coley said the Taser—which causes muscles to freeze up—normally causes subjects to be frozen so officers can safely handcuff them. However, because Lakey kept moving around on the ground, the Taser didn’t immobilize him so the officers called for backup and continued Tasing.

Both Shannon McMurray, a lawyer for Dingman, and Warren Gotcher, a lawyer for Taylor, told the New York Times that they would appeal the convictions.

“We’re very disappointed in the verdict,” said Gotcher. “No one could look at him and tell that he had that much of a diseased heart.”