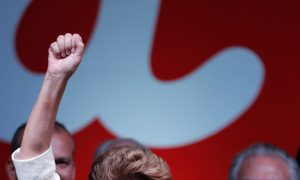 Brazil: Unlikely Any President Would Have Done Better With the Economy
0
Share Now
TelegramFacebookTweetEmailTellMeWeReddit
Copy Link 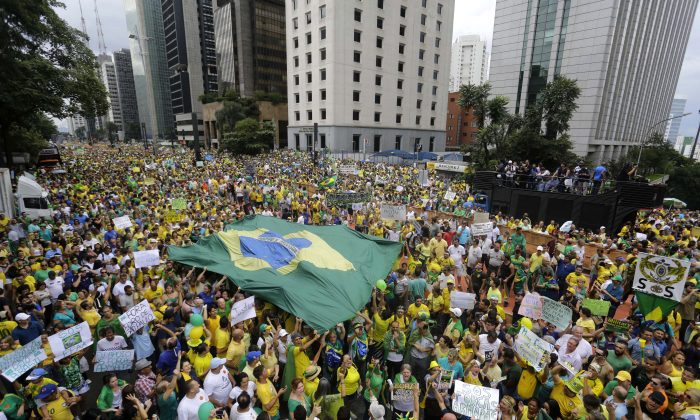 Mass anti-government protests erupted throughout Brazil on Sunday with estimates of at least 2 million people joining protests in over 50 cities across the country.

The Facebook event saw 117,000 people sign up to attend but over a million showed up in São Paulo alone, wearing blue, yellow, and green clothes and face paint, waving Brazil’s national flags.

While singing the national anthem, protesters called for the impeachment of leftist President Dilma Rousseff of the Workers’ Party, for not stopping a multibillion-dollar graft scandal in the semi-public oil giant Petrobras and for under-the-table loans to foreign countries, such as loaning Cuba money in 2009 to build a port in Mariel, Cuba.

“We are here to express our indignation with the government-sponsored corruption and thieving and to demand Dilma’s impeachment,” said Andre Menezes, 35, protesting on the skyscraper-lined Avenida Paulista in São Paulo.

“She may have not been directly involved in the corruption at Petrobras, but she certainly knew about it, and for me that makes her just as guilty and justifies her ouster,” he added.

RT @fofocasonline: #Brazil right now! People taking over the streets against the most corrupt government… pic.twitter.com/n61v9I9a8J

The protests come just after union protests a few days earlier by those who backed Rousseff.

An online petition passed around by protesters demanded Rousseff’s impeachment for “undermining the Brazilian Constitution and election fraud during Rousseff’s election” (translated from Portuguese).

Questions of election fraud were raised last October, as votes flooded in for Rousseff in her successful re-election bid. Brazil uses the company SmartMatic to count votes, the same company that was under investigation by the U.S. government in 2006 for possible ties to then Venezuelan head Hugo Chávez. SmartMatic denied any connection to the late Chávez.

Sunday’s protests were largely lighthearted and peaceful, in contrast to the violence seen during last year’s protests against the World Cup. Government auditors at the time found fraudulent billing that tripled the cost of building the World Cup stadium to $900 million in public funds.

Protesters are also voicing concern against the leftist group, São Paulo Forum. The forum was originally founded by former Brazilian President Luiz Inácio Lula da Silva, also from the Workers’ Party in Brazil, and the late Cuban leader Fidel Castro, as a gathering of socialist leaders seeking to create a bloc of allies in South America. Many of the forum’s members are leaders of Latin American countries, including Venezuela, Ecuador, Chile, and Peru.

“Our economy in 2015 will hit rock bottom. And unemployment is here to stay. Our government has been the most corrupt in Western history,” said geography professor Ugo Medeiros in Rio de Janeiro. “This march shows that the situation has gone beyond sustainable.”

In light of the troubles Brazil faces, protesters are calling for the return of military rule, which was imposed on Brazil from 1964 to 1985.

Brazilians had asked for military rule before in the 1960s as protection against the communists, and they are now seeking it again, viewing current Brazilian politicians in the ruling Workers’ Party and other parties as corrupt.

“We want the military to dissolve Congress and call new elections, because the level of corruption is too widespread to do anything else,” said Marlon Aymes, 35, helping carry a 20-foot banner in English reading: “Army, Navy and Air Force. Please Save Us Once Again of Communism.”

Aymes added, while marching along the golden Copacabana beach in Rio, “I don’t want my country to turn into a Venezuela, we don’t want an authoritarian government!”

#Brazil protesters who want a military coup may be a minority, but they also look better organized than most here pic.twitter.com/Ma8MohwffD

Epoch Times reporters Luis Novaes and Joana Ferreira,  and The Associated Press contributed to this report.