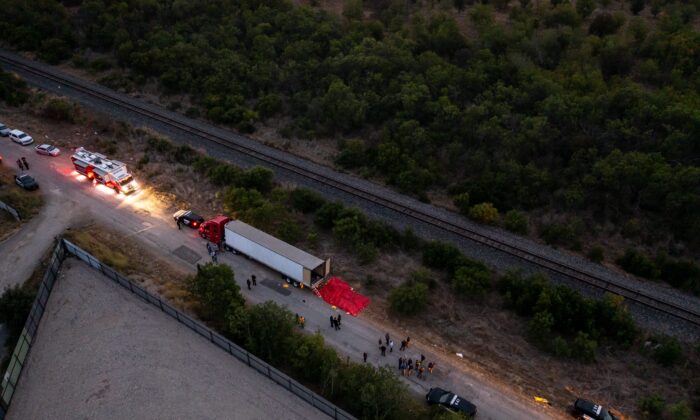 A federal grand jury in San Antonio has indicted four men in connection with a deadly human smuggling incident in late June that left 53 illegal immigrants dead and injured 11 more.

The 53 people who died, three of whom were minors, were among a group of illegal immigrants found inside an 18-wheeler trailer on a remote back road in southwest San Antonio on June 27.

All four of those indicted had been previously charged by prosecutors. The more serious grand jury indictments in San Antonio move the accused one step closer to trial.

Two Americans—the alleged driver, Homero Zamorano Jr., 46, of Pasadena, Texas, and his co-defendant, Christian Martinez, 28, of Palestine, Texas—could face the death penalty or life in prison if convicted, according to a statement from the U.S. Attorney’s Office for the Western District of Texas.

Prosecutors announced separately that a grand jury also returned indictments against two Mexican citizens suspected of possession of a firearm while unlawfully present in the United States. Juan Claudio D’Luna-Mendez, 23, and Juan Francisco D’Luna-Bilbao, 48, each face up to 10 years in prison if convicted, prosecutors said.

If convicted of the charges of conspiracy to transport and transport resulting in death, they face a maximum of life in prison or the death penalty. Attorney General Merrick Garland “will decide whether to seek the death penalty at a later time.”

“Should the Attorney General determine that the circumstances of the offense are such that a sentence of death is justified, the law requires that notice be filed with the court at a reasonable time before trial,” the department noted.

The two men also face up to 20 years in prison for charges related to transporting resulting in serious bodily injury. The sentencing will be determined by a federal district court judge upon conviction.

On the day that authorities found the truck of illegal immigrants, officers from the San Antonio Police Department were led to Zamorano—the truck’s driver—who was “observed hiding in the brush after attempting to abscond.”

The trailer was packed with 64 individuals and didn’t have water supplies or signs of working air conditioning inside, according to a court document filed in late June. That day, temperatures in the area reached as high as 103 Fahrenheit (39.4 Celsius). More than a dozen people from the truck were taken to hospitals with heat-related illnesses.

Martinez, according to a court document, had told a government confidential informant that the air conditioner wasn’t working properly before authorities found them. Martinez also said that Zamorano was “unaware the air conditioning unit stopped working and [that] was the reason why the individuals died.”

Investigators found communications between Zamorano and Martinez “concerning the smuggling event” after executing a search warrant on Zamorano’s cellphone, the DOJ said.

Agents from Homeland Security Investigations (HSI) confirmed that Zamorano was the individual from surveillance footage provided by Laredo Sector Border Patrol, which shows the vehicle passing through an immigration checkpoint that day.

“The driver could be seen wearing a black shirt with stripes and a hat. HSI agents confirmed Zamorano matched the individual from the surveillance footage and was wearing the same clothing,” the department said.

Texas Gov. Greg Abbott said in late June that the Biden administration’s illegal immigration policies are partly to blame for the deadly incident.

Republicans have attributed the spike in illegal border crossings to the Biden administration’s failure to enforce federal immigration laws and rolling back of key Trump-era border policies, including rules that were created to stem the COVID-19 pandemic. But Democrats counter that the surge in illegal immigration is largely owing to an economic crisis in Central and South America, even as Border Patrol agents have said that people from all over the world, and not just from Latin America, are arriving at the border.

In efforts to curb illegal immigration in Texas, Abbott in 2021 issued a number of orders, including one that allows state troopers to pull over vehicles with illegal immigrants suspected of having COVID-19.

Allen Zhong, Jack Phillips, and Reuters contributed to this report.