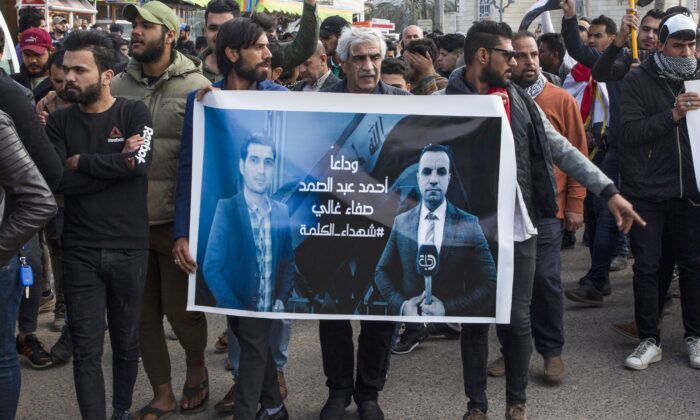 Iraqis take part in a rally on Jan. 11, 2020, to mourn two reporters (image) shot dead the previous evening in the country's southern city of Basra, where they had been covering months of anti-government protests. (HUSSEIN FALEH/AFP via Getty Images)
Middle East

Two journalists working for the Iraqi broadcaster Dijlah TV have been shot dead in the southern Iraqi city of Basra, the U.S. Embassy in Baghdad confirmed.

Correspondent Ahmed Abdel Samad and cameraman Safaa Ghali were covering protests in the city on Jan. 10, when unknown gunmen opened fire on their vehicle, killing them both.

Video footage posted on Dijlah TV’s website was described as showing Samad slumped in the passenger seat of the vehicle with a bullet wound to the right side of his head. Dijlah TV (or Al-Dijla), headquartered in Jordan, is one of Iraq’s most-watched news channels.

The video, which has been widely circulated on social media, also revealed at least three bullet holes in the right front door of the car.

Dijlah TV said that Ghali was taken to Basra General Hospital but died shortly after. A separate report by Iraq’s foreign-funded Al-Mirbad broadcaster said the cameraman had suffered three bullet wounds to his chest.

The U.S. Embassy in Baghdad on Jan. 11 released a statement on Twitter condemning the killings:

“The ongoing assassinations, kidnappings, harassment, and intimidation of members of the press, social media activists, and pro-reform activists in Iraq by armed groups cannot continue to go unpunished.”

The embassy put responsibility for the loss of life on the Iraqi government, which it said should be “upholding the right to freedom of expression, protecting journalists, and ensuring that peaceful activists can practice their democratic rights without fear or reprisal.”

“This can only happen if the perpetrators are found and brought to justice,” it added.

“Freedom of speech and freedom of expression are the cornerstones of democratic society. Respecting and upholding these rights is fundamental to the protection of democracy.”

Hundreds of Iraqis mourned the loss of the two reporters in a rally on Jan. 11.

“No journalist should have to fear for their safety or be singled out for attack over their coverage of protests,” said CPJ Middle East and North Africa representative Ignacio Miguel Delgado.

“We call on the Iraqi authorities to immediately open an investigation into the killing of Ahmed Abdul Samad and Safaa Ghali and to do their utmost to ensure journalists can cover the protests freely and without fear of reprisal,” he said.

Local reporters have said they believe the two journalists may have been assassinated by Iraq’s Iranian-backed militias for criticizing the destructive role of the Iranian regime in their country. The Epoch Times hasn’t been able to independently verify that.

Kurdistan 24 reported that hours before Samad’s death, he had posted a video on Facebook denouncing militia groups for their use of violence against protesters.

The alleged assassinations came as thousands of demonstrators took to the streets of Baghdad over the weekend to reinvigorate the anti-government protests that started in October 2019. Protesters are continuing their demands for an overhaul of a corrupt political system, and an end to foreign intervention in domestic affairs, better public services, and more jobs.

Groups within Iraq’s security forces, mostly Iran-backed militias, have been accused of killing more than 500 protesters since the start of the protests, The New York Times reported. The Wall Street Journal reported that anti-government protesters on Jan. 5 set on fire the local headquarters of an Iran-backed militia group in the southern city of Nasiriyah.

A further 19,000 have been injured since the protests began, according to the United Nations.