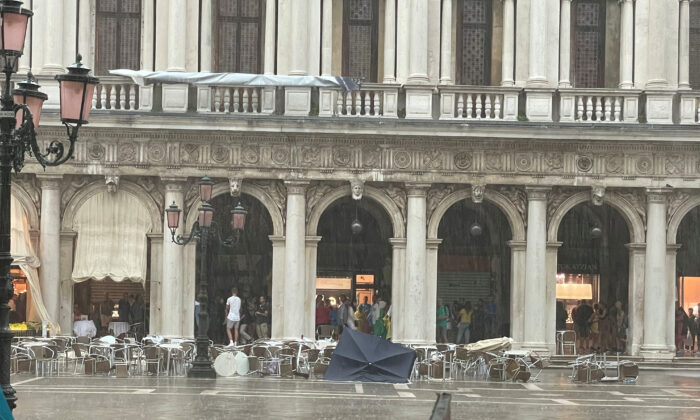 A rainstorm outside Doge's Palace in Venice, Italy, on Aug. 19, 2022. (Ph Zichert via Reuters)
Europe

Italy’s civil protection unit said that the bad weather would sweep south overnight and issued warnings for Friday for 11 of the country’s 20 regions.

A man and a woman were crushed to death by trees in separate incidents in Tuscany, while four people were injured when a tree fell in a campsite in the same region.

Video showed a ferris wheel spinning wildly out of control in the Tuscan resort of Piombino, with at least one of the metal canopied seats sent flying out into the air. No-one was on the ride at the time and there were no reports of injuries.

“A wave of devastation is lashing Tuscany,” the region’s president, Eugenio Giani, said in a statement announcing a state of emergency for the art-rich area.

The wind blew more than 140 kmh in some parts of northern Italy, damaging beach resorts in Liguria and Tuscany, meteorologists said.