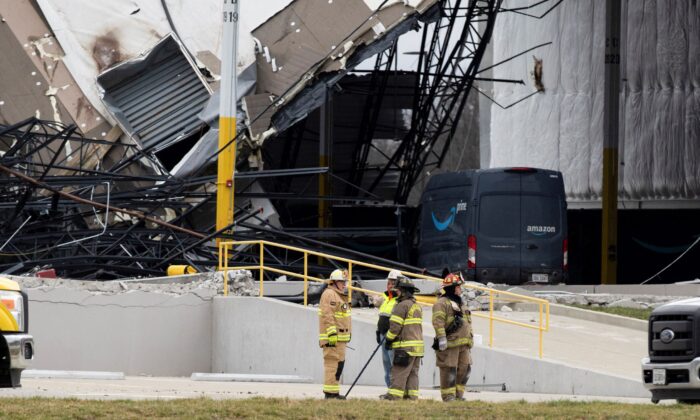 Responders stand at the site of a roof collapse at an Amazon distribution center after a tornado hits Edwardsville, in Ill., on Dec. 11, 2021. (Lawrence Bryant/Reuters)
Illinois

At least two workers were confirmed dead when an Amazon.com Inc. warehouse collapsed near St. Louis after tornadoes and strong storms roared through the area late Friday, local authorities said.

Several people remained unaccounted for as rescuers frantically searched for workers who may be trapped in the facility in Edwardsville, Illinois, Police Chief Mike Fillback told reporters. He said about 50 workers were believed to be at the warehouse when it was hit by an extreme “weather-related event” at about 8:30 p.m. Friday.

At least 30 workers were transported by bus from the scene and others may have left on their own, Fillback said. He said it had been difficult to get an exact number of workers who might be unaccounted for because the warehouse did not have “a set staff.”

Drone footage from the scene showed rescue workers picking through a huge area of debris in the pre-dawn darkness.

One woman outside, Sarah Bierman, said she was very worried about her husband, who works at the warehouse.

“I talked to him about eight o’clock tonight, a little before I texted him, and he was returning to the warehouse to drop his van off,” she told a reporter.

“And I haven’t heard from him since, I just heard through the news and we live in Edwardsville; we lost power. So I decided to come down here to see what was going on, and I had no idea the building looked that bad. And I’m just; I’m worried sick,” she said.

An Amazon spokesperson said the company was working with first responders at the scene.

“We’re deeply saddened by the news that members of our Amazon family passed away as a result of the storm,” said spokesperson Kelly Natel. “Our thoughts and prayers are with the victims, their loved ones, and everyone impacted by the storm. We also want to thank all the first responders for their ongoing efforts on the scene.

Illinois Governor JB Pritzker tweeted: “My prayers are with the people of Edwardsville tonight, and I’ve reached out to the mayor to provide any needed state resources.”

The U.S. National Weather Service had issued tornado warnings on Friday night for areas in several states including Arkansas, Tennessee, Missouri, and Illinois.