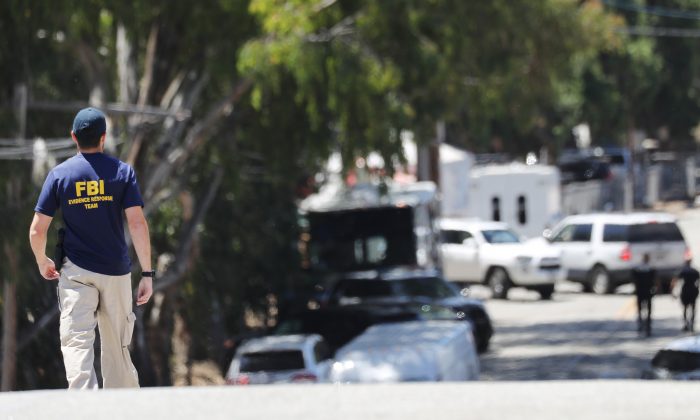 An FBI agent walks toward the site of the Gilroy Garlic Festival in Gilroy, Calif., on July 29, 2019.(Mario Tama/Getty Images)
Crime and Incidents

2 Children Among Dead in Attack at California Festival

A man opened fire on a crowd at a popular food festival in California on July 28, killing three people and injuring about 15 others before law enforcement shot him dead.

On July 29, authorities identified the alleged shooter as Santino William Legan, who is believed to have been 19 years old. Law enforcement was also searching for a suspected accomplice.

According to news reports, the victims killed included a 6-year-old boy, a man in his 20s, and a 13-year-old girl.

Within minutes of opening fire on the final day of the three-day Gilroy Garlic Festival, Legan was shot dead by responding police officers. He appeared to have randomly targeted his victims with a rifle.

The festival in Gilroy, located about 30 miles southeast of the city of San Jose, had security that required people to pass through metal detectors and have their bags searched. The assailant sneaked in through a fence that borders a parking lot next to a creek, Gilroy Police Chief Scot Smithee said at a press conference.

Some witnesses reported a second suspect, Smithee said, but it was unclear whether that person was armed or just helped in some way. The manhunt to find the alleged accomplice continued on July 29.

The father of the 6-year-old boy, Stephen Romero, gave a brief comment in the aftermath of the incident.

“My son had his whole life to live and he was only 6,” Alberto Romero told San Francisco Bay Area news station KNTV. “That’s all I can say.”

The boy’s grandmother, Maribel Romero, told Los Angeles station KABC-TV that she searched several hospitals before learning he had died. She said he was “always kind, happy and, you know, playful.”

Smithee said that they “have no idea of a motive” behind the attack.

President Donald Trump, meanwhile, described the assailant as a “wicked murderer,” adding, “We grieve for their families. … We’re praying for those who are recovering right now in the hospital.”

Read More
Trump on Gilroy Shooting: We Will Work to ‘Stop Evil, Prevent Violence, and Protect the Safety of All Americans’

Trump made the remarks during the signing of a bill that authorizes the extension of a compensation fund for 9/11 first responders.

“We will continue to work together as communities and as citizens to stop evil, prevent violence, and protect the safety of all Americans,” Trump said at the White House Rose Garden.

The wounded were taken to multiple hospitals, their conditions ranging from fair to critical, with some undergoing surgery. At least five were treated and released.

Police searched the two-story Gilroy home of the shooter’s family on July 29, less than a mile from the garlic festival, and a car parked outside before leaving the house with paper bags and what appeared to be other evidence.

California Gov. Gavin Newsom called the attack “nothing short of horrific” on Twitter.

“Tonight, CA stands with the Gilroy community,” he wrote. “My office is monitoring the situation closely. Grateful for the law enforcement’s efforts and their continued work as this situation develops.”

Smithee told reporters on July 29 at a press conference that the suspect legally purchased his rifle in Nevada earlier in July. The weapon was described as an “SKS, AK-47-type assault rifle.”

One witness who was at the festival when the attack occurred said he heard the assailant shout something out in response to someone, according to The Associated Press.

The band TinMan was starting an encore as the shots ran out. Singer Jack van Breen told AP he saw a man wearing a green shirt and grayish handkerchief around his neck fire into the food area.

Van Breen said he heard someone shout to the alleged shooter, “Why are you doing this?”

The reply: “Because I’m really angry.”

Van Breen and other members of the band then dove under the stage. The audience also started to scream and run.

Bandmate Vlad Malinovsky told AP he heard a lot of shots and then it stopped. Later, law enforcement told those hiding to come out with their hands up.

Another witness, Evenny Reyes of Gilroy, told San Jose Mercury News that people were desperate to get out of the area once the gunshots started.

“We were just leaving and we saw a guy with a bandana wrapped around his leg because he got shot. And there were people on the ground, crying,” said Reyes. “There was a little kid hurt on the ground. People were throwing tables and cutting fences to get out.”

Taylor Jackson was working at a booth drawing caricatures when she heard gunfire, saw people running, and “ran for the hills.” She said her boss ran in the opposite direction. Several hours later, Jackson was at a reunification center trying to get information on her whereabouts, according to AP.

Legan, who was identified in news reports as the assailant, appeared to post a photograph from the festival on his Instagram account shortly before the attack, accompanied by disgruntled captions. The account only appeared to be a few days old and was later deactivated.