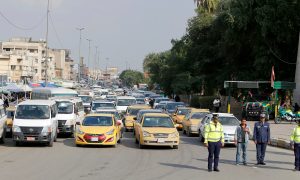 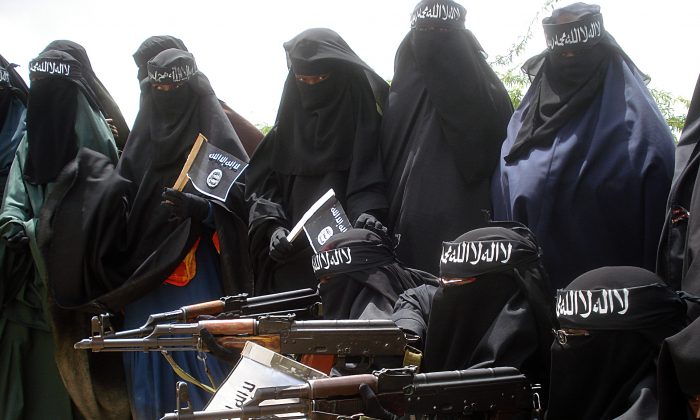 Somali women carry weapons during a demonstration organized by the extremist group al-Shabab in the Suqa Holaha neighborhood of Mogadishu, on July 5, 2010. (Abdurashid Abikar/AFP/File Photo via Getty Images)
Africa

2 Americans Among 26 Dead After Terrorists Storm Hotel in Somalia

MOGADISHU/GAROWE, Somalia—The death toll from the attack on a hotel in Somalia’s port city of Kismayu has risen to 26, with Kenyans, Americans, a Briton, and Tanzanians among the dead, the Jubbaland region’s president said on July 13.

A presidential candidate for upcoming regional elections was also killed in the assault by four terrorists, Jubbaland president Ahmed Mohamed said in a statement. At least two journalists and a U.N. agency staff member were also reported to have been killed.

Extremist group al-Shabab, which is trying to topple Somalia’s central government, on Friday claimed responsibility for the attack, which saw terrorists storm the hotel after targeting it with a car bomb while local elders and lawmakers were meeting to discuss the elections.

Regional president Mohamed said that three Kenyans, one Briton, two Americans, and three Tanzanians were among those killed.

“Among the dead was also a Jubbaland presidential candidate named Shuuriye. Four terrorists attacked the hotel. One of them was the suicide car bomber, two were shot dead, and one was captured alive by Jubbaland security forces,” he said.

He added that 56 people had been wounded in the attack, including two Chinese citizens.

Police had said earlier all the attackers had been killed.

The Somalia office of the U.N.’s International Organization for Migration also said on Twitter one of its local staff members, Abdifatah Mohamed, was among those killed.

@IOM_Somalia stands in solidarity with the people of Somalia. We are deeply saddened by the terrible loss of one of our colleagues Abdifatah Mohamed Abdow who dedicated his work to Somalia. Our deepest condolences to families and loved ones of all those who lost their lives. https://t.co/jv9ZEhyXMW

SADO Somalia, a local non-governmental organization, also said on Twitter its executive director Abdullahi Isse Abdulle had been killed in the attack.

A journalists’ group had confirmed on Friday that two journalists were among the dead; Somali-Canadian journalist Hodan Naleyah, the founder of Integration TV, and Mohamed Sahal Omar, reporter for SBC TV in Kismayu.

I’ve been in great shock since I heard the news of Hodan Naleyeh’s killing in an explosion in Somalia.

Hodan was an incredibly talented, creative, down-to-earth journalist who single-handedly tried to change the racist media narrative around Somalia and Somalis. pic.twitter.com/82O1wx3zvf

Hodan was changing, challenging and rewriting that narrative. pic.twitter.com/WO2JU2kjId

Separately, Mohamed Ibrahim Moalimuu, general secretary of the Federation of Somali Journalists, said in a statement, “We are saddened and outraged by this loss of life, and condemn in the strongest possible terms this appalling massacre.”

Al-Shabab was ejected from Mogadishu in 2011 and has since been driven from most of its other strongholds.

It was driven out of Kismayu in 2012. The city’s port had been a major source of revenue for the group from taxes, charcoal exports, and levies on arms and other illegal imports.

Kismayu is the commercial capital of Jubbaland, a region of southern Somalia still partly controlled by al-Shabab.

Al-Shabab remains a major security threat, with terrorists frequently carrying out bombings in Somalia and neighboring Kenya, whose troops form part of the African Union-mandated peacekeeping force that helps defend the Somali government.

By Abdiqani Hassan and Abdi Sheikh