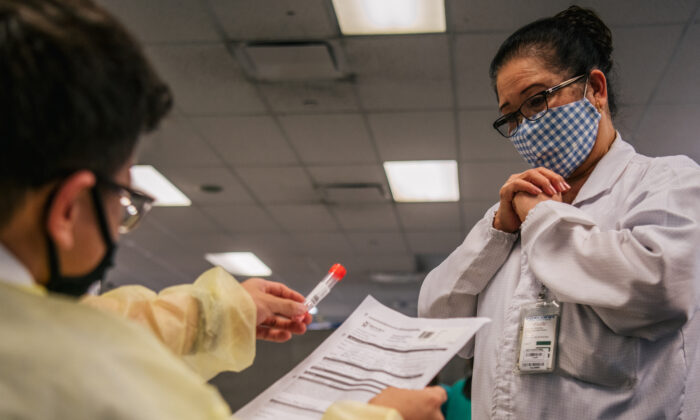 Texas on Dec. 21 reported what is widely believed to be the first death in the United States related to the new Omicron variant of the CCP (Chinese Communist Party) virus, which causes the disease COVID-19.

An unvaccinated Houston man in his 50s with underlying health conditions is believed to be the victim of the Omicron-related death, Harris County Judge Lina Hidalgo confirmed on Monday.

“Sad to report the first local fatality from the Omicron variant of COVID-19. A man in his 50’s from the eastern portion of Harris County who was not vaccinated,” Hidalgo wrote on Twitter, before urging people to “Please – get vaccinated and boosted.”

Harris Country Public Health (HCPH) also confirmed the death in a release and said the man was between the ages of 50–60 years old, was unvaccinated, and had been infected with COVID-19 previously.

“The individual was at higher risk of severe complications from COVID-19 due to his unvaccinated status and had underlying health conditions,” health officials said.

“Our thoughts and prayers are with the patient’s family, and we extend our deepest sympathies,” said Barbie Robinson, HCPH executive director. “This is a reminder of the severity of COVID-19 and its variants. We urge all residents who qualify to get vaccinated and get their booster shot if they have not already.”

So far, there have been 2,797 COVID-19 related deaths in Harris County, according to the county’s COVID-19 dashboard.

The death comes as Omicron, a highly mutated and more transmissible variant of the CCP virus, also known as SARS-CoV-2, is spreading quickly across the globe after it was first detected in South Africa last month.

During a briefing in Geneva on Monday, the World Health Organization (WHO) chief Tedros Adhanom Ghebreyesus warned against holiday gatherings over Christmas because there could be a surge in virus cases, despite preliminary data suggesting that Omicron may present milder symptoms than other strains.

Ghebreyesus said that there was now “consistent evidence” that the newest variant is spreading faster than the Delta variant, and urged people to cancel or delay festive gatherings.

“There is now consistent evidence that Omicron is spreading significantly faster than the Delta variant, and it’s more likely that people who have been vaccinated or recovered from COVID-19 could be infected or reinfected,” Ghebreyesus told reporters during a televised meeting.

“All of us are sick of this pandemic. All of us want to spend time with friends and family. All of us want to get back to normal,” he said, adding that “the fastest way to do this is for all of us, leaders and individuals, to make the difficult decisions that must be made to protect ourselves and others.”

“It’s better to cancel now and celebrate later than to celebrate now and grieve later. None of us want to be here again in 12 months’ time,” he said.

The WHO designated Omicron a “variant of concern” on Nov. 26.

As of Dec. 20, Omicron has been detected in nearly every U.S. state and territory. The variant accounted for 73.2 percent of new cases in the week that ended Dec. 18, up from 12 percent the week before, according to data released by the Centers for Disease Control and Prevention on Monday.

Earlier in December, the United Kingdom reported the first publicly confirmed death globally involving Omicron. As of Dec. 21, a total of 14 people in Britain have died with the newest variant, and 129 are hospitalized with it.