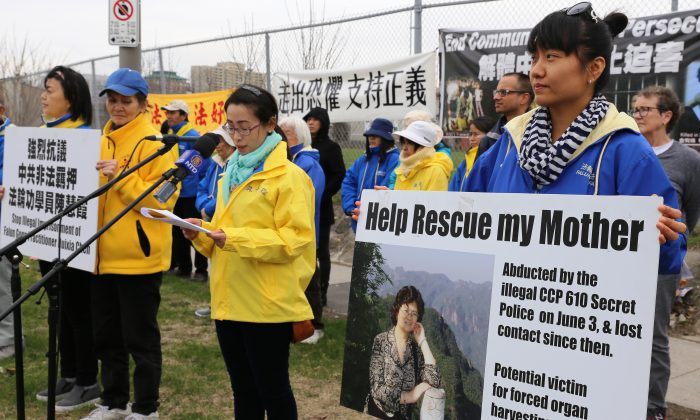 Hongyan Lu speaks at a rally in front of the Chinese embassy on April 25, 2017, to mark the 18th anniversary of Falun Gong practitioners’ large-scale appeal for freedom of belief in China on April 25, 1999, and to call for an end to the persecution of Falun Gong. To her right is Falun Gong practitioner Joanna Qiao holding a sign seeking help to call for the release of Lu’s mother, Huixia Chen, who is detained in China and faces three years' to life imprisonment for her belief. (Donna He/The Epoch Times)
Canada

OTTAWA—The largest appeal for freedom of belief in Chinese history was commemorated in front of the Chinese Embassy in Ottawa on April 25, 2017.

On April 25, 1999, more than 10,000 people gathered peacefully in Beijing to appeal for their freedom to practise Falun Gong, also called Falun Dafa, and the release of arrested fellow practitioners. Forty-five or so practitioners had been beaten and detained in the nearby city of Tianjin.

The 45 practitioners were released that evening, so those who had gathered to appeal left quietly and went home.

“We are honouring the spirit of peace, justice, and compassion with which that appeal was held 18 years ago,” said Xun Li, president of the Falun Dafa Association of Canada.

“I am here to honour the April 25th peaceful appeal. Meantime I also hope to draw attention to my mother’s case,” said Hongyan Lu, a Falun Gong practitioner living in Ottawa.

Lu recounted how her 60-year-old mother, Huixia Chen, was suffering from hepatitis B, cirrhosis, stomach problems, and endometriosis in 1998 when she first began practising Falun Gong.

“Only after a few months of practising Falun Gong, she became a different person and miraculously all the illnesses were healed,” said Lu.

However, Chen was arrested in June 2016, together with eight other practitioners.

In the first 20 days after the arrest, “she [my mother] was tortured and locked in a chair made of metal bars and not allowed to move,” said Lu. “This destroyed her health and made it hard for her to walk or stand up. She’s very weak. She has also been forced to endure brainwashing sessions.”

Chen is currently detained at the Shijiazhuang Second Detention Centre.

“My relatives in China are still struggling to get any updates on my mother and unfortunately have made little progress,” Lu said. “We have no idea what’s happening or what may happen to my mother under a regime without an independent or effective legal system.”

Lu noted that her family’s story of persecution is typical of that of millions of Falun Gong practitioners’ families in China.

“I call for the end of the persecution and the release of my other and all other incarcerated Falun Gong practitioners,” she said.

Falun Gong is a traditional spiritual discipline of the Buddha school. It consists of meditation, qigong exercises, and moral teachings based on the principles of truthfulness, compassion, and tolerance. The practice spread quickly due to the profound benefits that its practitioners experienced in their physical health and mental and moral well-being.

By the late 1990s, Chinese government surveys estimated that 70–100 million people had taken up the practice. Due to paranoia over the immense popularity of the practice, which was not under state control, Party leader Jiang officially launched the violent persecution in July 1999.

In 2006 the United Nations stated that 66 percent of reported victims of torture were Falun Gong practitioners. The U.N. and other groups have also reported growing evidence of rape, torture, widespread hate propaganda, deaths, and even state-orchestrated forced organ harvesting of Falun Gong practitioners to supply China’s booming transplant trade.