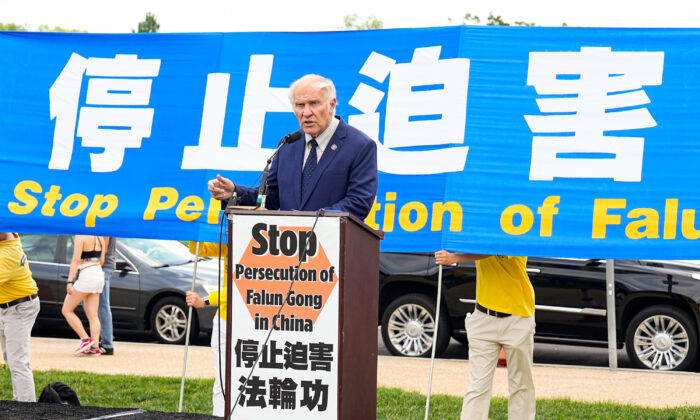 Rep. Steve Chabot (R-Ohio) speaks at a rally commemorating the 23rd anniversary of the launch of the Chinese regime's persecution of the spiritual group Falun Gong, held on the National Mall in Washington on July 21, 2022. (Larry Dye/The Epoch Times)
China Human Rights

The Chinese Communist Party (CCP) began brutally suppressing believers of Falun Gong throughout the country in 1999, a campaign that continues to this day. From July 1 to August 31, at least 1,850 Falun Gong practitioners were harassed, detained, tortured, involuntarily had their blood tested, and were deprived of personal property and retirement pensions, according to a Sept. 13 report on Minghui.org.

Minghui.org is a digital information platform of Falun Gong that records the CCP’s persecution activities in China.

Falun Gong, also known as Falun Dafa, is a spiritual discipline for character improvement that uses five slow-moving and gentle exercises and moral teachings based on truthfulness, compassion, and forbearance.

The CCP’s persecution of Falun Gong was launched by then CCP leader Jiang Zemin, who regarded the popularity of Falun Gong as a threat to his rule and the Party.

In June 1999, Jiang established two extralegal apparatuses—”Leading Group for Handling the Falun Gong Issue” and its office of operations called the “610 office”—for the sole purpose of eradicating Falun Gong.

Falun Gong practitioners in China have been subjected to detention, imprisonment, over 100 methods of torture, forced labor, and forced organ harvesting since 1999.

According to the September Minghui report, the CCP has upped its targeting of Falun Gong before the CCP’s 20th National Party Congress set for mid-October this year. The following are details about Falun Gong adherents who were persecuted in the past two months.

Zhang Xiufen, a Beijing Falun Gong practitioner who is over 70, was abducted by the Qingta police in Fengtai District, Beijing, on July 5 when she was on her way home. Four regular police officers and four auxiliary police beat her at the police station. The local detention station refused to take her in as she so was badly injured from the beating.

According to the Central Hospital of China Aerospace Corporation, Zhang had fractures to her thoracic vertebrae, ribs, and lumbar vertebral compression fractures.

Lyu Wei is a Falun Gong adherent in Harbin city, in the northeastern Heilongjiang Province. Lyu was taken from her apartment on July 11 after a dozen police broke into her apartment. The officers then ransacked Lyu’s home and confiscated a box containing approximately 300 pamphlets about Falun Gong.

The police did not present an arrest warrant or a search warrant.

She is not allowed to meet with a lawyer or her family, according to Minghui.

Ma Ping, a 60-year-old Falun Gong practitioner in Jilin city, Jilin Province, was sick at home on July 20. He was previously arrested and imprisoned for four years in 2009 in Gongzhuling Prison, Jinlin Province, where he suffered severe torture.

For example, several prison guards used electric batons to shock his whole body, genitals, and anus. He was also subject to brutal force-feeding, death-bed stretching, and confinement in a small cell for a month. His body carries scars from the torture, and his health has deteriorated. His son often takes him out in a wheelchair.

On the night of July 20, police broke a window and jumped into Ma’s house after his wife refused to open the door. When they saw Ma was in bad health, they took his son to the police station as a hostage to force Ma to give up his belief in Falun Gong. When Ma refused to comply, the police kept his son in the police station until late on July 23.

Robbed of Cash and Personal Property

On August 12, Falun Gong practitioners Li Chaoqun and Zhang Yixin (mother and daughter) were kidnapped by police in Chaisang District, Jiujiang City, Jiangxi Province, and did not get back the 102970 yuan (about $14,744) and $2,811 in cash the police confiscated.

At 8 p.m. on July 19, local police kidnapped Zhao Qingping and her mother-in-law, both followers of Falun Gong in Wuchang city, Heilongjiang Province, from their home.

The police ransacked their home and confiscated approximately 50 Falun Gong books, one desktop computer, one laptop, two printers, two MP3 players, 30 USB flash drives, four mobile phones, and 373,000 yuan (about $79,647) in cash that was recently withdrawn from the bank to help Zhao’s son purchase an apartment.

The police refused to return the money. Zhao’s mother-in-law was released the next morning, but Zhao was detained under criminal charges.

Zhao’s family has hired rights lawyers to defend her in court.

These cases are a few examples of the persecution targeting Falun Gong practitioners in China. Due to the CCP’s internet firewall and censorship of information, complete details about the extent of the persecution are not available.

The cross-party Inter-Parliamentary Alliance on China (IPAC) issued a statement on July 20 calling for an end to the CCP’s suppression of religious groups and those imprisoned for defending their religious rights.

“Today marks the solemn anniversary of the beginning of the Chinese government’s brutal campaign of persecution against Falun Gong practitioners. 23 years later, we remember all those in China who have been denied freedom of religious belief,” the IPAC said in the statement.

“We once again call on our governments to stand up and speak out for an end to such repression. The Chinese government must be held accountable for upholding the human rights and religious freedom of all peoples in China.”

The IPAC is an international cross-party group of legislators pushing for democratic countries to take a tougher stance on the CCP and its activities on trade, security, and human rights.

Li Jiesi and Minghui.org contributed to the report.