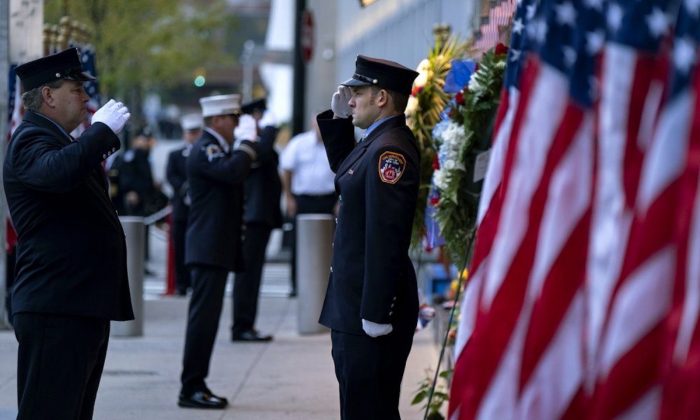 New York City firefighters salute in front of a memorial on the side of a firehouse adjacent to One World Trade Center and the 9/11 Memorial site during ceremonies on the 18th anniversary of 9/11 terrorist attacks in New York on Sept. 11, 2019. (Craig Ruttle/AP Photo)
US News

Americans commemorated 9/11 with solemn ceremonies and vows on Sept. 11 to “never forget” 18 years after the deadliest terror attacks on American soil.

A crowd of victims’ relatives assembled at ground zero, where the observance began Wednesday with a moment of silence and tolling bells at 8:46 a.m.—the moment when a hijacked plane slammed into the World Trade Center’s north tower.

“As long as the city will gift us this moment, I will be here,” Margie Miller said at the ground zero ceremony, which she attends every year. She lost her husband, Joel.

“Because I feel like if we don’t come, they don’t need to do it. And I want people to remember,” said Miller, of Baldwin, on Long Island. After so many years of anniversaries, she has come to know other victims’ relatives, and to appreciate being with them.

“There’s smiles in between the tears that say we didn’t do this journey on our own. That we were here for each other. And that’s the piece that I think we get from being here,” she said.

First responders who braved the hazardous toxins of what was “ground zero” recounted on Sept. 9 the sacrifice made by the Fire Department of New York (FDNY) on 9/11.

More than 200 first responders from the FDNY have perished from 9/11-related illnesses stemming from the aftermath of the terrorist attack. This year, 22 of their names were added to the FDNY Memorial Wall.

“Back then, we did not have enough respiratory protection for every member that responded,” said Michael Schreiber, the Sergeant-at-Arms of the Uniformed Firefighters Association in an interview with NTD News. “Even in the days after we knew it wasn’t clean to breathe … we had a job to do—we had to save our brothers.”

Schreiber said it was one of his first days on the street when the towers were attacked; he was in probationary school at the time.

“I lost six guys who really never even got to get off probation,” he said.

Extension of the 9/11 Victims Fund

“Today, we come together as one nation to support our Sept. 11 heroes, to care for their families, and to renew our eternal vow—never ever forget,” the president said on July 23.

Schreiber joined the president of the Uniformed Firefighters Association, Gerard Fitzgerald, who mentioned that there were certain politicians that did not support extending the fund.

“I won’t mention the few that did forget, but all in all, our legislators across the country remembered and supported the Victims Compensation Fund,” said Fitzgerald. “And for all of us who were affected from Sept. 11, and all those that will be affected going forward, we appreciate it.”