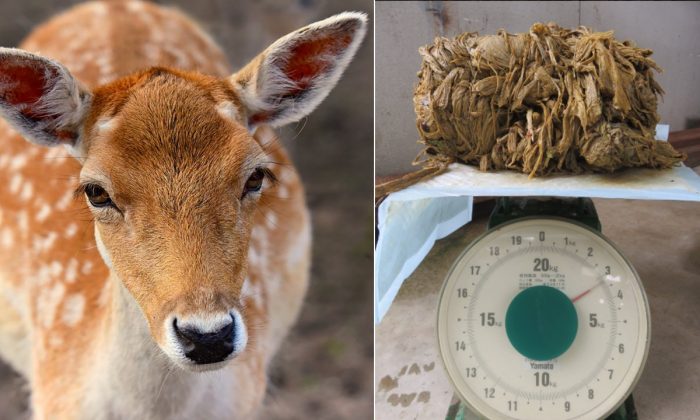 Stock image of a deer. (Mabel Amber/Pixabay) Image of the plastic taken out of the body of a 17-year-old female deer that died at Nara Park in Japan on March 24. (Nara Welfare Deer Association)
Asia & Pacific

A 17-year-old female deer in Japan’s famous Nara Park died on May 24 and an autopsy found nine pounds of plastic in her stomach.

Nara Park is a popular tourist destination for its deer, with around two million visitors a year, according to SoraNews24.

Deer in Nara are considered sacred because in the Shinto religion they are believed to be messengers of God.

Lately, however, the deer of Nara have been in the news for other reasons—there have been incidences of tourists overfeeding them and deer biting them, according to CNN Travel.

SoraNews24 reported that since March this year eight deer died in the park from unknown reasons and autopsies showed six died due to plastic in their stomachs.

The 17-year-old sick female deer was sighted by vets from the Nara Deer Park Association on March 23. The deer refused to eat and died the next day. It weighed just 66 pounds when it died and an autopsy revealed nine pounds of plastic in its stomach, according to Unilad.

Like cattle, deer cud their food and vets explained that the deer died because it couldn’t regurgitate, digest, and ingest new food.

Authorities have become increasingly concerned about the problem and have been appealing to visitors not to carry food for deer in plastic bags.

Signs around the park request visitors feed deer only deer senbei, or deer crackers, sold around the park. However, there are increasing cases of tourists feeding them other food and deer biting into the plastic bags the tourists carry, reported SoraNews24.

Deer have a strong sense of smell and they can make out that there is food inside the plastic bags but they can’t differentiate between the plastic and the food.

Authorities are also concerned about the plastic waste tourists leave behind and have been urging them to carry it away with them.

Nara Traveler’s Guide mentions that deer are wild animals and are capable of finding their own food that includes a variety of plants and grass in the park.

In a blog post, the Association said the bag can prevent accidental ingestion of plastics by deer. “When taking a walk in Nara Park, please take this eco bag,” a translation of the post said.

The Heritage of Nara

Nara is the oldest park in Japan, established in 1880. The sacred deer of Nara are famous across the country because of religious associations attached to them.

A portion of Nara hosts Kasuga Taisha Shrine that’s home to Takemi Kajichi no Mikoto, a Shinto deity believed to have used a deer as its vehicle to Kashima Shrine (which is also written with a character for “deer”). This legend made deer sacred animals, according to Nara Traveler’s Guide.

The park has a separate maternity enclosure called Roku-en. Every year in April, on an average 200 pregnant deer are placed in the enclosure to deliver their young ones. By mid-July, as the fawns are able to keep pace with their mothers, tourists are invited to visit them in a special event called “Kojika Koukai” (Presentation of the Fawns).

The park is also home to the Todaiji Temple, the world’s biggest wooden temple and a UNESCO World Heritage site. The site is the location of a few other shrines, including Japan’s second-tallest pagoda, which is five stories high.

However, deer are the main attraction.