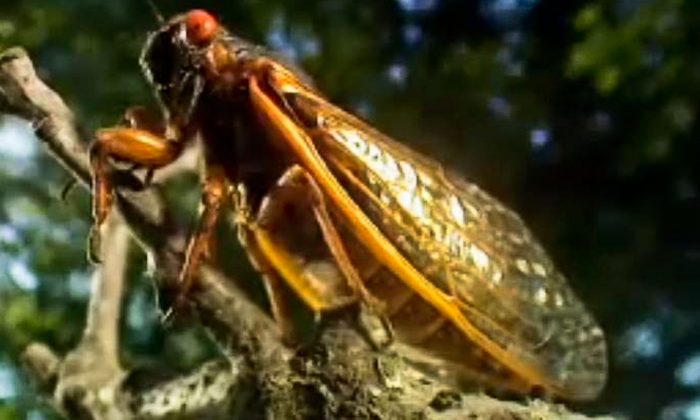 17-year-cicadas emerge after nearly 17 years underground in a BBC special. (Screenshot via The Epoch Times)
Science

17-Year Cicadas: The winged insects known as 17-year cicadas will emerge in swarms across the American East Coast late May, having gone underground in 1996.

Buzzing will fill the air, predators will feast on a colorful banquet of yellow-orange wings and bright red eyes.

“It’s a garish beast,” said Cole Gilbert, associate professor of entomology at Cornell University, according to the Cornell Chronicle. But it’s relatively harmless.

The insect neither bites nor stings, but it may damage young trees and shrubs.

The females make slits in the bark to lay their eggs during their brief existence above ground of about a month starting late May. Yale News reports that pesticides are not advised, as they will not be effective against the 17-year cicadas. Cheesecloth or netting can be used at the base of young trees, and for mature trees, the cicadas can have the positive effect of natural pruning.

The cicadas live for nearly 17 years underground, feeding on the sap in roots. In the 17th year, they emerge, usually during sunset late in May and when the ground has reached a temperature of about 65 degrees Fahrenheit. Millions of them could occupy a single acre, said Sir David Attenborough in a BBC special on cicadas (see video below).

“There are so many cicadas, that predators get full, and they can’t eat another bite,” Gilbert told the Cornell Chronicle in April. “This allows most individuals to survive.”

Gilbert explains that decreased populations, however, have negatively impacted this survival insurance.

Almost every spring some 17-year or 13-year cicadas emerge, part of different broods. In some areas, broods became extinct when the cicadas became so few that predators were not satiated and continued to eat until all the cicadas were gone. Urbanization leading to cicada habitat loss may be a contributing factor to the decreased populations, Gilbert said.