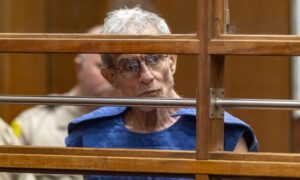 In a large, coordinated robbery scheme, a group of people wearing hoodies walked into Apple stores across 19 counties in California, grabbed as many products as possible within seconds, and fled the scene, according to authorities.

#BREAKING: We have announced the arrest & charges against 17 individuals in connection to the recent grand theft spree of @Apple stores across #California. https://t.co/fG9TDwWFz5 https://t.co/InS9aFxiFi

The robbers, who often targeted Macbooks and iPhones on display, made off with more than $1 million worth of products.

California Attorney General Xavier Becerra announced the arrest and charges against 17 individuals for this “grand theft spree” on Sept. 27.

Authorities have arrested seven adults, and arrest warrants have been issued for nine other suspects.

“The arrests are the product of an investigation conducted by the San Luis Obispo Police Department and the Oakland Police Department, with the assistance of the California Department of Justice eCrime Unit,” according to a press release by Becerra’s office.

The crimes appear to date back to mid-May starting in northern San Diego County, according to local reports.

The snatch-and-grab suspects went to a Costa Mesa Apple store in Southern California and took products worth $29,000. An off-duty officer was punched and kicked when he tried to stop them.

Were looking for these five suspects involved in a commercial burglary last night before 9pm at the Apple Store in South Coast Plaza. Any info, call our Detective Bureau at 714-754-5637 pic.twitter.com/C1uKt0ewti

The names of the suspects have not been released and the investigation is ongoing.