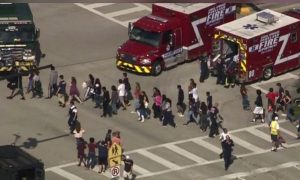 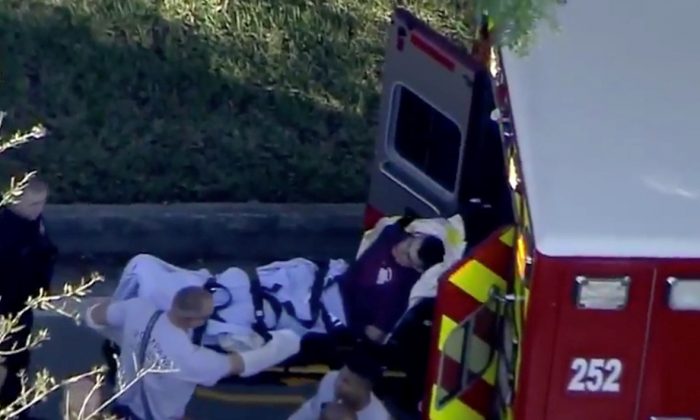 Nicolas de Jesus Cruz was placed in handcuffs by police is loaded into a paramedic vehicle after a shooting incident at Marjory Stoneman Douglas High School in Parkland, Florida, Feb. 14, 2018 in a still image from video. (WSVN.com via Reuters)
Crime and Incidents

PARKLAND, Florida—A former student at a Florida high school opened fire in the school on Wednesday, causing “numerous fatalities” and sending hundreds of panicked young people fleeing their classrooms before he was arrested by police, authorities said.

The Broward County Sheriff’s Department said “at least 14 victims” from the shooting had been taken to area hospitals, but it is not immediately clear how many of those will survive. Two of those in hospital have been reported to have died from their injuries.

The Sheriff later told Fox 10 that 17 have been confirmed dead — 3 died outdoors, 12 died inside a school building, and 2 died in hospital — with others still remaining in surgery.

The violence erupted shortly before dismissal at Marjory Stoneman Douglas High School in Parkland, about 45 miles north of Miami. Live television footage showed students streaming out of the building as dozens of police and emergency services personnel swarmed the area.

The suspected gunman Nicolas de Jesus Cruz, a 19-year-old former student who was expelled for disiplinary reasons, has surrendered to police without a struggle, Israel said.

“It’s catastrophic,” he said. “There really are no words.”

Nicolas de Jesus Cruz, a 19-year-old former student at Douglas High School in Parkland, Florida, identified as suspected shooter. He was previously reported as a threat to the school, according to the @MiamiHerald https://t.co/l7jJXBZlt5 #breaking pic.twitter.com/xmmA0RQOCx

The Sheriff told Fox that Cruz had multiple magazines with him and was shooting with what police believe was an AR-15 rifle. It remains unclear if Cruz had a second rifle on him.

Israel offered few details on Cruz’s motive other than to say he had previously attended the school. “I don’t know when he left,” the sheriff added.

It was the 18th shooting in a U.S. school so far this year, according to gun control group Everytown for Gun Safety. That tally includes suicides and incidents when no one was injured, as well as the January incident when a 15-year-old gunman killed two students at a Benton, Kentucky, high school.

More than five years have passed since a gunman killed 20 first-graders and six educators in Newtown, Connecticut, stirring the long U.S. debate about gun rights, which are protected by the Second Amendment of the U.S. Constitution.

Staff and students told local media that a fire alarm went off around the time the shooting started, sparking chaos as some 3,000 students at the school first headed into hallways before teachers herded them back into classrooms, to seek shelter in closets.

Kyle Yeoward, a 16-year-old junior, told Reuters he was in the bathroom on the second floor of the building on the campus where most of the shooting took place, when he heard two shots.

“He let loose on the freshman building,” Yeoward said

McKenzie Hartley, 19, who identified herself as the sister of a student at the school described the scene in a text message to Reuters: “She heard him shooting through the windows of classrooms and two students were shot.”

Panicked parents checked on their children.

“It is just absolutely horrifying. I can’t believe this is happening,” Lissette Rozenblat, whose daughter goes to the school, told CNN. Her daughter called her to say she was safe but the student also told her mother she heard the cries of a person who was shot.

“She was very nervous. She said that she could hear the person who was shot crying out for help,” she said.

Televised images showed dozens of students, their arms in the air, weaving their way between law enforcement officers with heavy weapons and helmets, and large numbers of emergency vehicles including police cars, ambulances and fire trucks.

The school had recently held a meeting to discuss what to do in such an attack, Ryan Gott, a 15-year-old freshman told CNN.

“My prayers and condolences to the families of the victims of the terrible Florida shooting,” U.S. President Donald Trump said on Twitter. “No child, teacher or anyone else should ever feel unsafe in an American school.”

My prayers and condolences to the families of the victims of the terrible Florida shooting. No child, teacher or anyone else should ever feel unsafe in an American school.