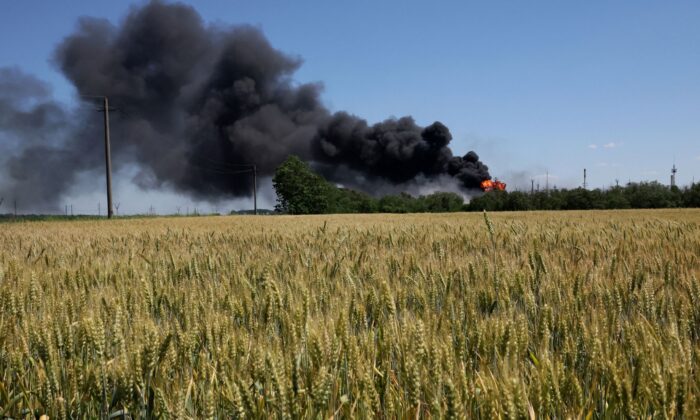 A fire from a gas processing plant continues to burn behind a field of wheat after the plant was hit by shelling a few days prior in Andriivka in the Kharkiv region in Ukraine, on June 21, 2022. (Leah Millis/Reuters)
Russia-Ukraine War

KYIV/KHARKIV—Russian forces pounded Ukraine’s second-largest city Kharkiv and the surrounding countryside with rockets, killing at least 15 people, in what Kyiv called a bid to force it to pull resources from the main battlefield to protect civilians from attack.

Inside Russia, a fire tore through an oil refinery just 8 km (5 miles) from the Ukrainian border, after what the refinery described as a cross border attack by two drones.

In the main battlefield city of Sievierodonetsk, where Russia has claimed to have Ukrainian forces surrounded since last week, pictures filmed by a freelance journalist showed the battle was not over, with Ukrainian troops able to resupply their garrison by crossing a river in inflatable rafts.

The Russian strikes on Kharkiv, throughout Tuesday and continuing on Wednesday morning.

Ukrainian authorities said there were reports of more casualties overnight and on Wednesday morning after 15 people were killed and 16 wounded on Tuesday in the Kharkiv region.

The main battlefield is now to the south of Kharkiv in the Donbass region with the worst fighting concentrated in the devastated city of Sievierodonetsk.

Russia says Ukrainian forces in Sievierodonetsk are trapped. After the last bridge over the Siverskyi Donets river was destroyed last week, Moscow ordered the Ukrainians to surrender or die.

But Oleksandr Ratushniak, a freelance photographer who reached Sievierodonetsk with Ukrainian forces in recent days, filmed soldiers crossing the river in an inflatable raft, evidence that the garrison is not yet cut off.

There was no immediate Ukrainian comment about the apparent drone strike which suspended production at Russia’s Novoshakhtinsk oil refinery, on the Russian side of the frontier with Donbass territory controlled by pro-Russian separatists.

Video footage posted on social media appeared to show a drone flying towards the refinery, before a large ball of flame and black smoke billowed up into the summer sky. The local emergency service, cited by Interfax, said no one was hurt and the blaze was put out.

Ukraine generally does not comment on reports of attacks on Russian infrastructure near the border.

In a separate incident, Russian authorities said four people were killed after a shell exploded at an ammunition depot deep inside Russia.

Wednesday is marked in both Russia and Ukraine as the “Day of Remembrance and Sorrow,” anniversary of the day when Hitler’s Germany attacked the Soviet Union. An estimated 27 million Soviet citizens died in World War Two.

In Russia, President Vladimir Putin laid flowers at a memorial flame for the dead.

Moscow repeated threats on Wednesday to take unspecified retaliation for a decision by Lithuania to block rail shipments of some goods to Russia’s Kaliningrad enclave on the Baltic Sea. Lithuania says it was required to block the shipments under EU sanctions that took effect on Saturday.

“We are convinced that the illegal sanctions adopted by the European Union are absolutely unacceptable in this situation,” Kremlin spokesperson Dmitry Peskov said in a call with reporters, adding that countermeasures were being prepared.

By Pavel Polityuk and Vitalii Hnidyi