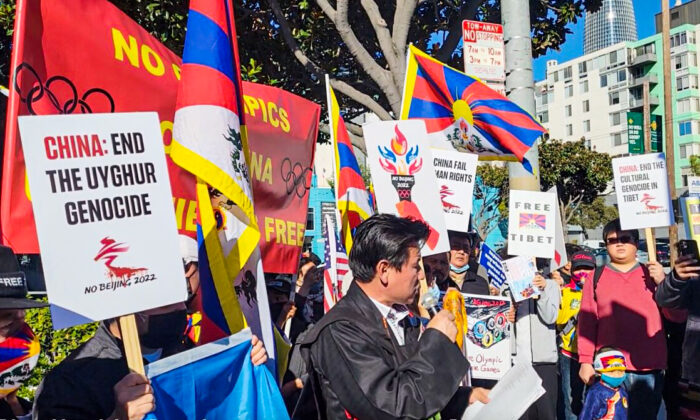 SAN FRANCISCO—15 human rights groups gathered outside the NBC Sports office in San Francisco on Friday, Dec. 10 to call on the station not to air the 2022 Beijing Winter Olympic Games.

“We ask NBC to stop trying to pretend that sports and the Olympics are divorced from basic moral principles. Don’t broadcast these games,” Giovanni Vassallo, president of Bay Area Friends of Tibet, said at the rally.

The groups thanked countries that announced a diplomatic boycott of the 2022 games.

“On behalf of the freedom-loving countries around the world, I want to say, thank you to the leaders of the United States of America, the United Kingdom, Australia, Canada, New Zealand, and Lithuania for announcing the diplomatic boycott of the Beijing Olympic Games. We applaud and congratulate them for their gesture,” Tao Tenzing Dhamcho, Board Director with International Tibet Network, said at the rally.

He and all the speakers argued that a diplomatic boycott is not enough, calling for a full boycott of the Winter Olympics in Beijing.

Dhamcho said, “However, as a Tibetan, I say that is not enough. That is still not going further [sic]. We want a total and complete boycott of the Beijing Olympic Games.”

She cited the CCP’s use of concentration camps and the genocide of Uyghurs in Xinjiang.

The groups also delivered a joint letter to NBC signed by 200 human rights groups calling on the station not to air the Beijing Olympic Games. After gathering in front of NBC, the group marched through the city to the Chinese consulate to continue their rally.

The CCP has a history of human rights violations against a number of groups outside and within the country.

A 2020 independent people’s tribunal in London concluded the CCP committed genocide against the Uyghur people. The Uyghur Tribunal stated forced birth control and sterilization policies are crimes against humanity.

In 2006, allegations of the CCP killing Falun Gong practitioners to sell their organs for transplant first emerged. Since then, numerous investigations have confirmed grisly details of this atrocity. A 2019 China Tribunal held in London declared the CCP guilty of forced organ harvesting from prisoners of conscience for years.

In recent years, the CCP has also gained international media attention for its suppression of freedom in Hong Kong. Between 2019 and 2020 widespread protests broke out throughout Hong Kong in response to an extradition law, which would have allowed Hong Kong to transfer criminal suspects to not only Taiwan but also Beijing to be tried for crimes. The law was retracted, but Hong Kongers argued the law would have given the CCP more control over its autonomy and suppressed the region’s freedoms.

With reporting by NTD’s Jason Blair.