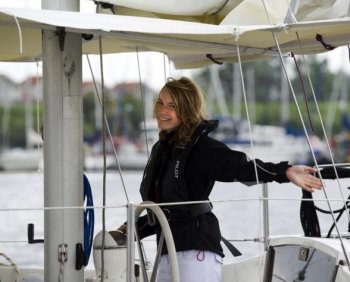 Dutch Laura Dekker, 14, waves goodbye as she leaves the port in Den Osse on August 4. Laura Dekker set sail on her yacht, Guppy, for Portugal, from where she will begin her bid to become the youngest person to sail solo around the world. (Marcel Antonisse/Getty Images)
Europe

14-Year-Old Laura Dekker to Sail Around the World

Marco t'Hoen
View profile
Follow
biggersmaller
Print
Laura Dekker, a 14-year-old Dutch girl, set sail on Wednesday for Lisbon, Spain, on the first leg of a two-year solo sailing trip around the world in a bid to become the youngest person ever to do so.

After almost a year-long delay, Dekker left from Den Osse with her father along for the sail to Portugal to test and make any final adjustments to her boat or equipment. From there, she goes solo.

Dekker's attempt to become the youngest one to sail around the globe will first bring her from Lisbon to the Portuguese Island of Madeira.

Initially, she wanted to start her bid to become the youngest person to sail around the world at age 13, but was blocked from doing so. A Dutch court put her under the charge of child-care protection services last year after ruling that her planned journey posed too much of a risk and would impact her personal development.

But last week, a Dutch court in Middelburg ruled that Dekker no longer needed to be under supervision, as she had made all the necessary improvements to her plan. She got a bigger boat to put in more equipment, learned to manage her sleep during such a trip, made a safety plan, got more sailing experience and made a sailplan.

Born on a ship and living out her first four years of life at sea, Dekker has sailing in her blood. She lives on a boat with her father and their dog Spot in a harbor in central Holland. She spends most of her time around the harbor.

Dekker's sailplan shows she stops regularly and will sometimes meet with other sailors following the same route. On the longer parts of her journey, she will have radio contact with other ships at least twice a day.

Her second stop will bring her to the Canary Islands, off the coast of Morocco, where she will wait out the hurricane season.