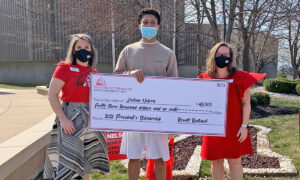 Teen Earns Scholarship, Decides to Donate His Own Savings to Another Student in Need
0
Share Now
TelegramFacebookTweetEmailTellMeWeReddit
Copy Link

A file photo of an infant. (Christiana Bella/Pixabay)
Regional News

A 14-year-old girl gave her newborn daughter to customers at a New Jersey restaurant before leaving the eatery, according to the restaurant owner and witnesses.

The girl appeared to have just given birth to the baby, with its umbilical cord still intact, when she handed the child to customers at a restaurant in Jersey City on May 19, a restaurant employee told the Jersey Journal.

The owner of the restaurant, El Patron Mexican Restaurant, said the teen was “desperate” and asking, “Somebody,’ like, pleading, ‘Can you help me?’ She was asking for the firefighters. It was a very dangerous situation,” WPIX reported.

“Once she handed the baby to someone else, one of our customers, she just left,” employee Frankie Aguilar told the Journal, adding that the child had its umbilical cord still attached. The child was then taken to Jersey City Medical Center.

Alease Scott, a mother of two preschool children who was there eating, said the teen handed the baby to her, WPIX reported. The 14-year-old then quickly left.

“At first, I said to myself, ‘Well, let me get your name if you’re just going to drop the baby off,’ because she said she was in a rush, that she had to pick up another child,” Scott said.

According to police radio transmissions cited by the paper, the girl was located soon after the incident. She was also taken to Jersey City Medical Center.