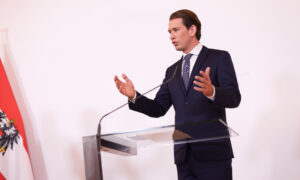 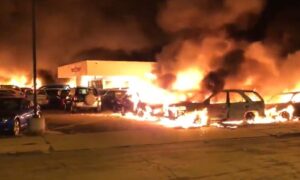 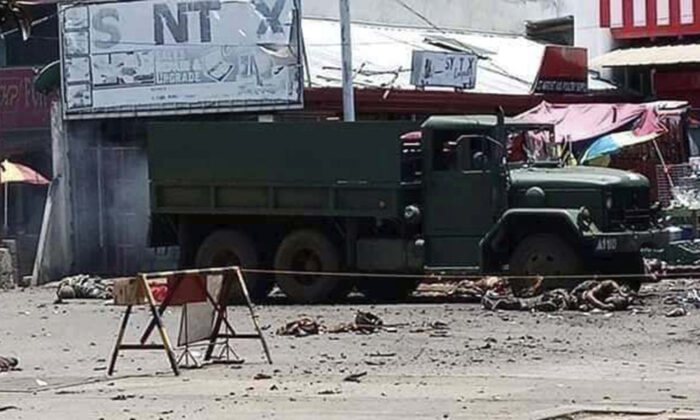 A military truck lies at an area where a bomb exploded at the town of Jolo, Sulu province, southern Philippines, on Aug. 24, 2020. (Philippine National Red Cross via AP)
Asia & Pacific

MANILA, Philippines—Muslim militants allied with the ISIS terrorist group set off a powerful motorcycle explosive followed by a suicide bombing that together killed 14 people on Monday, many of them soldiers, in the worst extremist attack in the Philippines this year, military officials said.

At least 75 soldiers, police, and civilians were wounded in the midday bombings in Jolo town in southern Sulu province, regional military commander Lt. Gen. Corleto Vinluan said. The bombings were staged as the government grapples with the highest number of coronavirus infections in Southeast Asia.

Vinluan said most of the victims, including children, were killed and wounded in the first attack, when a bomb attached to a motorcycle exploded near two parked army trucks in front of a grocery store and computer shop in Jolo.

“It was a vehicle-borne improvised explosive device which exploded while our soldiers were on a marketing run,” Vinluan told reporters.

A second blast, apparently from a female suicide attacker, occurred about an hour later and killed the bomber, a soldier, a police commando, and wounded several others, a military report said. It said the suspected bomber walked out of a snack shop, approached soldiers who were securing a Roman Catholic cathedral and “suddenly blew herself up.”

Snipers were deployed in the area to guard against more bombers as the victims were carried to an ambulance.

A third unexploded bomb was reportedly found in a public market. Jolo was immediately placed in a security lockdown by troops and police.

Initial pictures seen by The Associated Press showed soldiers carrying a man from the scene of the explosion near an army truck while another victim lay on the road. The wreckage of a motorcycle and body parts were seen on the road.

The first bombing was carried out near a town plaza and the cathedral in the predominantly Muslim and poverty-stricken province. The country’s southern region is home to minority Muslims in the largely Roman Catholic nation and has been the scene of decades of Muslim separatist unrest, particularly in remote island provinces such as Jolo.

There was no immediate claim of responsibility for the attacks, but the military blamed an Abu Sayyaf militant commander, Mundi Sawadjaan, who has been linked to suicide bombings in recent years in Sulu.

Military officials said last week that Sawadjaan had plotted bombings in Sulu using two female suicide attackers. Army troops were carrying out a covert operation to locate and capture Sawadjaan and the suicide bombers in June when four army personnel were stopped at a Jolo police checkpoint and later shot to death by a group of policemen.

The army angrily described the killings as a rubout and demanded murder charges be filed immediately against nine policemen. Police officials, however, say it may have been a mistaken encounter between the army and police forces.

The military has been waging a yearslong offensive against the Abu Sayyaf, a small but violent group listed by the United States and the Philippines as a terrorist group for past bombings, ransom kidnappings, and beheadings.

Its armed fighters have dwindled in number to a few hundred in recent years due to battle setbacks and surrenders, including a key commander, Abduljihad Susukan, who gave up to authorities two weeks ago after being wounded in battle.

Susukan has been blamed for kidnappings and beheadings of hostages, including foreign tourists. He reportedly surrendered through a Muslim rebel chief who has signed a peace deal and was cooperating with the government.

Military officials said they were not discounting the possibility that Monday’s bombings were staged partly in retaliation for the detention of Susukan, who is now in police custody and faces multiple murder and kidnapping charges.