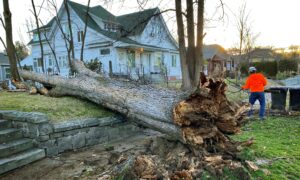 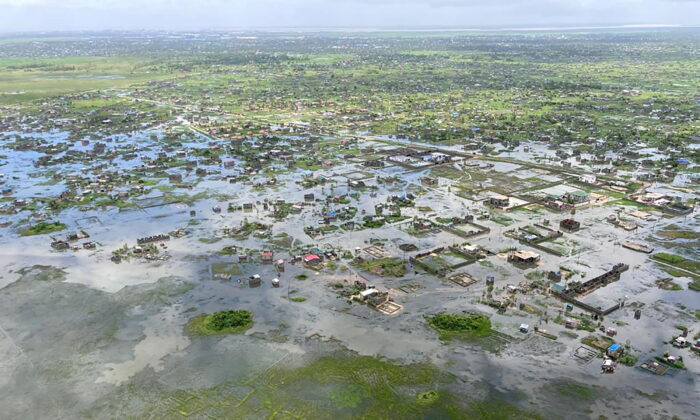 Aerial view of flooding after Tropical Cyclone Eloise, in Beira, Mozambique, on Jan. 22, 2021. (Courtesy of Mercy Air via Reuters)
World

JOHANNESBURG—The death toll from storm Eloise rose to at least 13 on Monday after heavy winds, rain and flooding destroyed buildings, drowned crops, and displaced thousands in parts of southern Africa.

Eloise weakened from a cyclone to a tropical storm after making landfall in central Mozambique on Saturday, but continued to dump rain on Zimbabwe, eSwatini—formerly known as Swaziland—South Africa and Botswana.

Six people were killed in Mozambique, the country’s National Institute for Disaster Risk Management and Reduction (INGD) reported, while the number of displaced people rose to more than 8,000, with thousands of homes wrecked or flooded.

A 5-year-old child was killed in South Africa’s eastern Mpumalanga province after being swept away, said George Mthethwa, head of communications for the provincial department of cooperative governance and traditional affairs.

In neighboring Limpopo, fast-flowing rivers destroyed a makeshift bridge, leaving people hoping to cross stranded on either side. Others waded through the knee-high flood waters.

The death toll stood at two in eSwatini, according to police. Three people had been reported killed in Zimbabwe and one in Madagascar.

“Rainfall is starting to ease off slowly,” said Puseletso Mofokeng, senior forecaster at the South African Weather Service, adding there was still a risk of localized flooding as more rain was expected on saturated ground.

Zimbabwe’s national water authority also warned that dams were spilling over and could cause floods further downstream.

Following Cyclone Idai in 2019, rainwater flowed from Zimbabwe back into Mozambique causing devastating floods. Over 1,000 people died across the region, with the impoverished coastal nation bearing the brunt.

Eloise struck an area still recovering from that devastation and already flooded in parts.

Evacuations, warnings and higher community awareness have led to a much lower death toll, but some temporary camps, where evacuees were taken, have been cut off.

Sergio Dinoi, head of the advisory team in Mozambique for the U.N.’s humanitarian arm, said groups were venturing out, in some cases via boat, on Monday to assess the damage.

By Kirthana Pillay and Emma Rumney