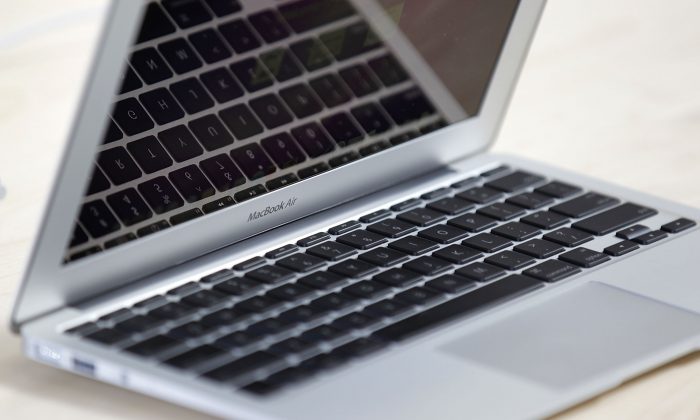 A 12-inch Retina MacBook Air could be in the works.

Apple is supposedly producing a new MacBook air that has the portability of the 11-inch model, and the productivity capabilities of the 13-inch model.

This new 12-inch MacBook Air could launch in either Q3 or Q4 of 2014, or in early 2015, according to KGI securities analyst Ming-Chi Kuo.

If the new MacBook Air is indeed delayed till 2015, it will be because Intel is having problems with their 14-nanometer Broadwell chips.

According to a post in Chinese forum Feng.com, the Cupertino company is looking to boost its 15-inch Retina MacBook Pro line processors by 200MHz.

All models will also be given 16GB of RAM, while a top-end Retina MacBook Pro will get 1TB of storage space.

These new MacBook Pros could arrive in physical stores on Tuesday, July 29, according to MacRumors.

While the rumor that the 15-inch MacBook Pros received a processor boost is accurate (2.0 to 2.2 GHz for the lower end model, and 2.3 GHz to 2.5 GHz for the higher end model), the top-end Retina MacBook Pro retains the 512GB storage space like its earlier iteration.

SAN FRANCISCO (AP) — Major U.S. companies are starting to reap their most rapid growth in fertile lands of opportunity far from home.

Technology trendsetters Apple Inc., Google Inc., Facebook Inc. and Netflix Inc. all mined foreign countries to produce earnings or revenue that exceeded analysts’ projections in their latest quarters. Prodded by the steadily rising demand for Internet access and online services in developing countries, these technology companies will likely be wading even deeper into overseas markets for years to come.

“The philosophy is to start your growth in the states and then take your fight overseas,” says BGC Financial analyst Colin Gillis. “That’s what the big guys are doing.”

The intensifying international focus extends beyond technology. Century-old companies such as Coca-Cola Co. and Ford Motor Co. also are hoping to make more money in countries including China and India.

Few U.S. industries are tying their fortunes to overseas markets as aggressively as the technology sector, where new sources of revenue are often just a matter of equipping people with a computing device and an Internet connection.

Soaring sales of iPhones in China, Russia, India and Brazil during the April-June period helped Apple overcome softening demand for the device in the U.S. and Europe, where consumers seem to be more interested in waiting for the autumn release of a new iPhone that’s expected to feature a larger screen.

Google generated 58 percent of its revenue outside the U.S. in its second quarter, the highest level yet for the Internet’s most powerful company.

Facebook already gets 55 percent of its revenue overseas, and the growth in those markets is outpacing by what’s happening in the U.S. The social networking service has attracted 1.1 billion users in foreign markets versus 200 million in the U.S. and Canada.

Netflix’s Internet video service added 1.1 million international subscribers, nearly doubling the number it gained in the U.S during the April-June quarter. The company expects the trend to continue as Netflix enters six more European markets, including France and Germany, in September.

Like many other money managers, McMillan isn’t convinced companies will be able to live up to investors’ high hopes.

Overall sales have been slow, and profit margins are at record levels after years of cost-cutting. Those factors will make it tougher for companies to find ways to ratchet their earnings even higher.

The natural response for many companies? Look abroad because that’s where most of the potential customers are. The U.S. population accounts for less than 5 percent of the world’s roughly 7.2 billion people.

The U.S., though, still boasts the world’s largest economy with a mass market of consumers who can afford more products and services than most other parts of the world. That means growth in other countries, especially in markets outside of Europe, Japan and South Korea, often isn’t as lucrative as it is in the U.S.

Apple, which has always demanded premium prices, is discovering this as it sells more devices overseas. For instance, the iPhone’s average selling price fell to $561 in Apple’s most recent quarter, a 3 percent drop from a year ago and a 13 percent decline from $647 two years ago.

Google’s growth in foreign markets outside Europe is one of the reasons that the company’s average advertising prices have been falling for nearly three years.

Advertisers so far haven’t been willing to pay as much to peddle their wares to consumers who don’t have as much disposable income as people in the U.S.

Although the company remains profitable overall, Netflix still isn’t making money on an international expansion that began nearly four years ago. The company’s international losses have exceeded $800 million so far, with more likely to come with the move into France and Germany looming.

Most publicly held companies are willing to endure short-term financial pain in return for what they expect will be a long-term gain in growth. That’s one of the reasons Ford Motor is building four plants in China and two in India. By 2020, the automaker hopes Asia Pacific and the Middle East will account for one-third of its sales. The regions accounted for 22 percent of Ford’s sales in the latest quarter.

Coca-Cola is looking abroad for growth largely because it’s becoming tougher for beverage makers to increase revenue in a U.S. market already awash in soda and other refreshments. Things look much different in some large overseas markets where billions of people only recently have begun to develop a taste for the company’s products. In 2012, for instance, the per capita consumption of Coca Cola’s beverages was 403 servings of 8-ounce drinks annually in the U.S., compared with 39 annual servings in China and just 14 in India.

An increasing thirst for Coca-Cola products in China, India and the Middle East helped boost the company’s international sales by 3 percent in the second quarter while volume remained flat in North America.

Even large U.S. companies that are growing faster domestically realize they need to keep pushing in countries where many consumers may not make enough money to buy their products yet. That’s one reason General Motors CEO Mary Barra told analysts on a conference call last week that her company remains bullish on China, even though car sales there have been slowing.

“As the market grows, we need to participate in that growth … in a disproportionate fashion to make sure that we are seizing the opportunity,” Barra said.