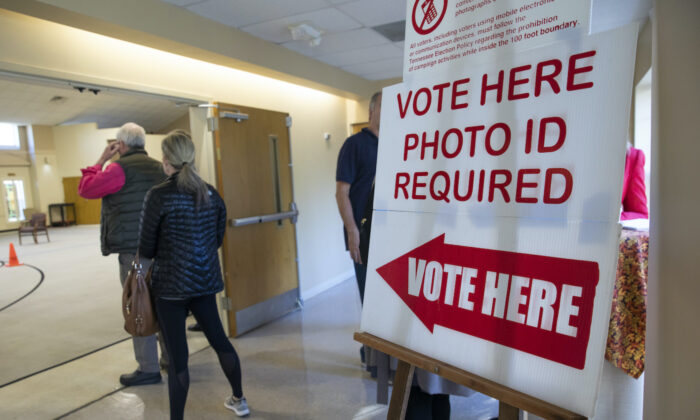 That changed in 2020 when the job of counting ballots and certifying elections became a key part of the alleged election fraud in the Presidential election. Secretaries of state—charged with certifying election results—found themselves in the spotlight.

In eleven states, including some key election battlegrounds, the Republican candidate has openly expressed doubts about the legitimacy of the 2020 presidential election. They have been dubbed “election deniers” by mainstream media and left-leaning groups. States United Democracy Center, a nonprofit founded in 2020, called these candidates “a threat to our democracy.”

Secretaries of state have a variety of duties that usually include serving as their state’s chief election official. They oversee elections, choose voting systems, manage registration and vote-by-mail, and officially certify voting results.

States United is most concerned about the elections taking place in states where Trump disputed the 2020 election counts: Arizona, Georgia, Nevada, and Michigan.

States United Democracy Center was founded in 2020 to form a response to the possibility that then-President Donald Trump lost and subsequently contested the results of the election. The organization was founded by Norm Eisen, a left-leaning lawyer who served as the “Ethics Czar” in the Obama White House. It is currently led by Eisen as well as former Massachusetts Chief Deputy Attorney General Joanna Lydgate, and former New Jersey Governor Christine Todd Whitman.

According to States United and its “Replacing the Refs” election tracking project, here are some of the more prominent candidates running for secretary of state who have called into question the validity of the 2020 election and advocate for greater voter integrity.

“There is no justification for any state’s involvement in ERIC,” Allen told a local TV station in an interview. “The minute I become Secretary of State, Alabama will be out of it for good.”

“Alabama taxpayers do not want their information provided to a Soros-funded, leftist group like ERIC,” Allen said, adding that the power behind the scenes is billionaire activist George Soros. “Through the Pew Charitable Trust, their funding partner is Open Society,” said Allen. “Open Society is George Soros.”

Arizona state representative Mark Finchem has spoken out for years about corruption in American politics, and has repeatedly stated that Trump won the 2020 election. Finchem was present at the “Stop the Steal” rally in Washington on Jan. 6, 2021, and led efforts in Arizona to challenge the results of the 2020 election.

If elected, Finchem promises to ban early voting and drastically restrict the use of mail-in ballots. He is also attempting to suspend the use of all electronic vote-counting machines in Arizona.

In a statement endorsing his candidacy, former President Trump stated, “He is a patriot who has fought for our country right from his earliest moments in government. Mark was willing to say what few others had the courage to say … on the massive Voter Fraud that took place in the 2020 Presidential Election Scam.”

Dominic Rapini is the former chair of Fight Voter Fraud, Inc., an organization alleging widespread fraud in the 2020 Presidential election. He left that position in August 2021, and since then has been reluctant to directly address the issue with reporters.

When questioned, he has repeatedly been vague about his current thoughts on the 2020 election. In an interview with FOX 61, Rapini said “Joe Biden is the duly elected president of the United States,” without clarification. He told Connecticut Insider last year, “Listen, Joe Biden, God bless him, was the duly elected president of the United States and beyond that, there’s so many details there I can’t really dive into them, I don’t know the particulars … I think there were definitely anomalies, and there’s things we need to understand, but I have no reason to believe there was widescale fraud in Connecticut, there’s nothing there that I can prove.”

Republican candidate Diego Morales has spoken forcefully about what he calls “the scam perpetrated against all Americans” in 2020. Morales served as an aide to Mike Pence when Pence was governor of Indiana.

“The 2020 election was flawed and the outcome is questionable,” he wrote in an opinion piece published in March.

He detailed three components to the alleged fraud in the 2020 election: the wide use of mail-in voting without proper safeguards; the increased scrutiny of in-person voters as compared to mail-in votes; and the censorship of the mainstream press.

“The blatant censorship and intervention of Big Tech,” wrote Morales, led to the suppression of “the most blockbuster story of that election season, the NY Post revelations about the Hunter Biden laptop and its proof of the Joe Biden’s leadership of a family criminal cartel … that sold out America to the most corrupt regimes in the world, from Russia to China.”

He vows to make Indiana “a model of election sanctity for all America”, enacting reforms to mail-in voting, demanding voter identification, and improving ballot tracking and auditing.

Rayla Campbell is a radio host who has repeatedly used her platform to declare that Trump was the legitimate winner of the 2020 election. “Our great president [Trump] is THE President elected for the next four years. We know it. They’re trying to steal an election because they can’t win or do anything right,” she said on her show immediately after election day.

“They did it with the cheating of the counting of the ballots,” she said on her show. “And they will always do stuff like that because they can’t win legally, and that’s why we’ve got to fight a lot harder. A lot harder, and a little dirty. Because they fight extremely dirty. It’s time to beat ’em at their own game, and we can do that.”

In the two years since the 2020 election, she has not changed her position and has repeated her claims in interviews with the press.

Kristina Karamo first gained attention in 2020, when she claimed to have witnessed corruption in the processing of mail-in ballots in Detroit.

Karamo has a history of alleging fraud in the election, but since becoming a candidate for secretary of state, Karamo has been less forceful in her claims. In a recent interview she said that she would not elaborate on “whether or not I think the election was stolen.”

Kim Crockett is a lawyer has said this about the 2020 election: “I don’t think the word ‘lawless’ is too strong.”

“The corporate media narrative is that 2020 was the most secure election in the history of voting,” wrote Crockett in an endorsement of the book “Rigged” by Mollie Hemingway. “This is propaganda designed to stop the conversation,” wrote Crockett. “And they viciously attack anyone who dares to question that conclusion, calling us names like ‘election deniers’ instead of engaging us on election policy.”

She has called absentee voting “insecure” and supported the claims of widespread election fraud made by Dinesh D’Souza in his film “2000 Mules”.

Jim Marchant is perhaps the most forceful critic of American democracy currently running for public office. Beyond claims of election fraud in 2020, he has stated that all elections in America are controlled by hidden powers.

“In Nevada and maybe other places all over the country—we haven’t in Nevada elected anybody since 2006. They have been installed by the deep state cabal,” Marchant said in an interview with the “Flyover Conservatives” podcast that were reported by the nonprofit organization Media Matters for America.

“This cabal,” said Marchant, has “a lot of power over all of our lives here and in the whole world. “They are concentrating on the United States because we are an impediment to … their supreme ultimate power.”

Audrey Trujillo has called the 2020 election “a huge, huge, I would say coup, to unseat a president.” On her campaign Facebook page, she wrote, “Trump’s election was stolen.”

Trujillo has alleged voter fraud at all levels in New Mexico and U.S. elections. America, she wrote, is “no better than any other communist country like Venezuela or any of these other states where our elections are being manipulated.”

Brooke Paige is a conservative activist who has expressed support for the Jan. 6 protest at the U.S. Capitol, and has consistently alleged that the 2020 election was “stolen”. In posts to his Facebook campaign page, he has claimed the fraud happened by “stuffing the ballot box and corrupting the tabulation of the election results.”

In an interview with CNN in August, Paige acknowledged that Biden won in Vermont in 2020, but said the question of whether Biden legitimately won the presidency is “such a complex question,” hinging on how someone defines “legitimately,” that he could not offer a direct answer.

Paige has attacked state-level changes to voting rules in 2020, and claims “anecdotal evidence” of suspicious behavior during the vote count. He also alleges heavy pro-Democratic media bias as a major contributor to Biden’s victory and the failure to cover any claims of voting fraud.

In a June interview with Cowboy State Daily, he endorsed the film “2000 Mules” and its claims of widespread voter fraud. He stated his belief that “the left has stolen elections with ballot drop boxes.”