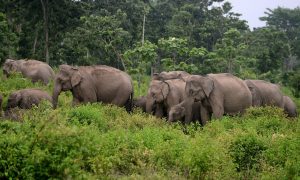 Elephant Pulls 7-Year-Old From Bed, Drags Her Outside, Tramples Her to Death
0 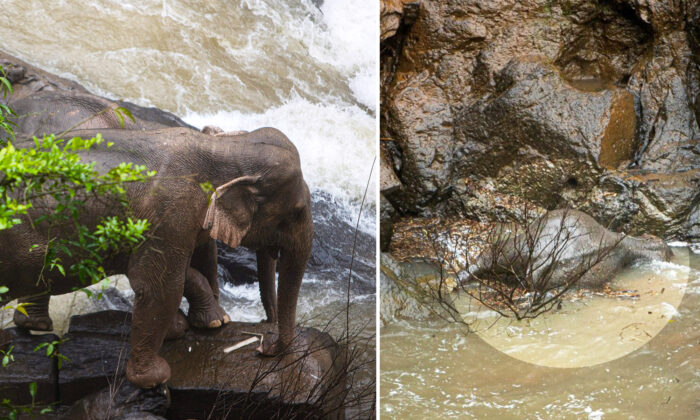 WARNING: Some readers may find the following content distressing.

A total of 11 elephants tragically lost their lives when they tried to save one of their young in danger. They fell from the perilous banks of a waterfall at Khao Yai National Park in central Thailand.

The deaths gradually mounted as the brave herd, one by one, staged attempts to rescue the first victim, a young calf that had fallen into the rushing water below.

According to the Daily Mail, Thailand’s Department of National Parks, Wildlife and Plant Conservation (DNP) officials were called to the scene in the early hours of the morning on Oct. 5, 2019. They were alerted by locals after a herd of agitated elephants blocked a road close to the waterfall, attempting to reach the calf that had fallen into the water.

Three hours later, officials found the first body, that of the 3-year-old elephant calf. Shortly thereafter, five additional bodies were found near the base of the waterfall, and a drone identified five more.

Two surviving elephants were spotted trapped on a ledge nearby; officials prepared and threw parcels of food to the struggling pair, hoping to boost their energy reserves and help them to climb to safety. With the Thai officials’ aid, these two elephants eventually clambered to safer ground.

Edwin Wiek, the founder of Wildlife Friends Foundation Thailand, feared for the surviving elephants’ futures. Herding elephants rely upon one another for protection and food, he explained. The two remaining elephants, having lost a grand total of eleven crucial comrades, may struggle to make it on their own.

“It’s like losing half your family,” Wiek lamented, speaking to the BBC. “There’s nothing you can do; it’s nature, unfortunately.”

The incident may also have a lasting emotional impact on the survivors. Colorado State University conservation biologist George Wittemyer, who has studied elephants at the Samburu National Reserve in northern Kenya since 1997, explained to National Geographic that elephants typically have “a fascination with death.”

“Every time it happens, it’s not the same, but it is striking behavior,” Wittemyer said, “not based on survival or necessity, but based on some sort of emotion.

“The fact that they interact and have behavioral interactions with their dead in a form that is not explainable in any simple, evolutionary context speaks to the deeper emotional lives of elephants that we can’t easily study,” the biologist continued.

The Khao Yai National Park waterfall, known colloquially as Haew Narok (Hell’s Fall), has become notorious among locals after a number of tragic incidents. Notably, an entire herd of elephants fell to their deaths back in 1992; the tragedy made headlines across Thailand and even caught the attention of international news outlets.

Thailand’s Khao Yai National Park spans over 2,168 square meters and is home to approximately 300 wild elephants. In order to minimize agitating the remaining elephant population, park officials have put strict regulations in place for tourists passing through the landscape.

National park tourists “must not use the car horn, make loud noises, or use a flash when taking photos,” The Thaiger explains, adding that all drivers are advised to maintain a minimum 30-meter distance from wild elephants at all times.

Losing almost 4 percent of the park’s total wild elephant population in one day was a tragic event that will take years for Khao Yai National Park to recover from. There has never been a better time to respect and protect these beautiful creatures.