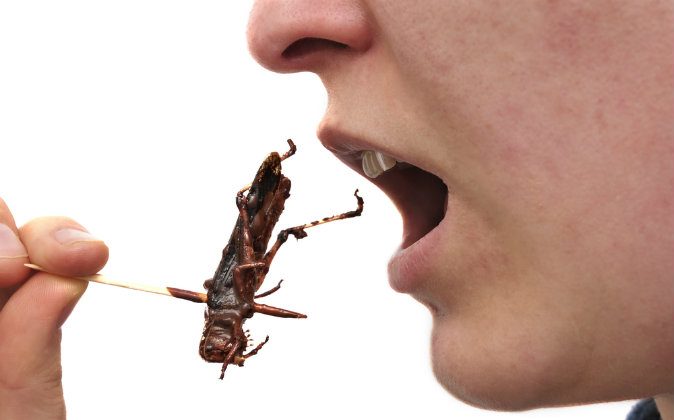 11 Bugs a Lot of People Love to Eat

For about 2 billion of the world’s 7 billion people, bugs are part of a traditional feast. Some 2,000 species are eaten globally, according to a 2013 U.N. Food and Agriculture Organization report.

The U.N. looks to an ever-growing human population—then to the world’s hearty bug population as a much-needed food source.

Bugs might worm their way into the Western diet one day, as a source of protein and other nutrients with less of an environmental impact than cattle.

The Bugs We Eat

An adult palm weevil next to pupal cases, and a euro coin to show scale. (Wikimedia Commons)

The palm weevil (Rynchophorus ferrugineus) is the most popular edible beetle in the tropics. It’s a bane to palm trees—boring into their trunks and infecting the trees with red-ring disease—but a nutty flavored treat for humans.

Joe Flowers posted a video on YouTube of himself trying the weevil for the first time (see below). He writes in the video’s description: “They had a glorious taste, with hints of soy and a nutty flavor.”

Ever wonder where the waxy coating on an apple comes from? (Shutterstock)

That waxy shine on your apple might be resin secreted by a lac bug. Produce shippers and supermarkets in the United States are required by law to label produce that has been coated. The signs set up next to the produce should say, “Coated with food-grade vegetable-, petroleum-, beeswax-, or shellac- based wax or resin, to maintain freshness.”

The mopane caterpillar (Imbrasia belina) is probably the most popular edible caterpillar, according to the U.N. report. It can be eaten dry, like crispy potato chips, or cooked and coated in sauce.

One of the first steps in preparing it is squeezing out its insides, which appear as a greenish goo.

Zimbabwean nutritionist Marlon Chidemo told The Associated Press that the worm contains three times the protein beef does and it requires far less plant-life to feed on than cattle.

It is harvested and eaten not only in Africa, but also in other regions.

“It’s got some chew,” this unfazed taster says of the mopane caterpillar (see video).