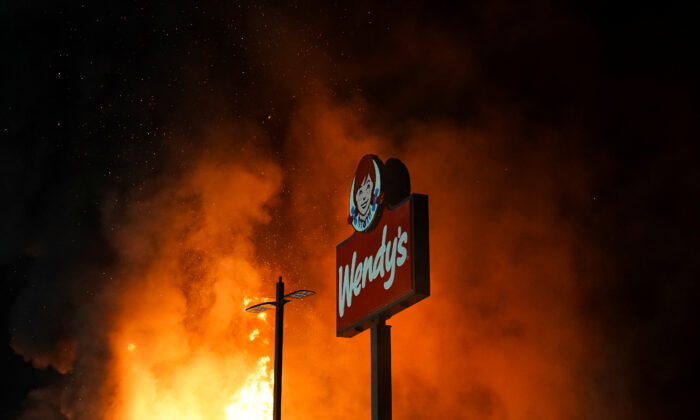 Wendy’s burns following a rally against racial inequality and the police shooting death of Rayshard Brooks in Atlanta, Ga., on June 13, 2020. (Elijah Nouvelage/Reuters)
US News

$10,000 Reward Offered for Identity of Person Who Allegedly Burned Down Wendy’s

Police in Atlanta are searching for a person who they believe is responsible for allegedly setting a fire that burned down a Wendy’s during a violent demonstration on Saturday night.

Crime Stoppers of Atlanta announced it is offering a $10,000 reward for information that will lead to arrests, adding that authorities are looking for information on anyone else suspected in the arson.

The Wendy’s location was located off University Avenue, where 27-year-old Rayshard Brooks was shot and killed by an officer on Friday. Officials are investigating his death.

Meanwhile, officials posted a photo of a woman wearing a black mask, hat, and a coat who was “attempting to hide her identity” after the Wendy’s arson.

Videos of people setting fire to the fast-food restaurant have appeared on social media. WSB-TV reported on Saturday that protesters broke the window’s of the establishment and appeared to set it on fire.

Atlanta police said Sunday the department fired one officer and placed another on administrative duty for the fatal shooting of a black man who resisted arrest after failing a field sobriety test. The incident also caused the Atlanta police chief to resign.

“I know you’re just doing your job,” Brooks tells one of the officers about 40 minutes into the encounter when he agrees to a breath test. After he takes the test, an officer tries to handcuff Brooks and he attempts to flee—resulting in a struggle that ended with his death late Friday.

The Georgia Bureau of Investigation (GBI) said Brooks wrestled a taser from one of the officers and ran. The GBI released security camera footage from the restaurant that showed a running Brooks turn and point an object in his hand toward an officer a few steps behind him. The video shows the officer draw his gun and fire as Brooks continues to run, then falls to the ground in the parking lot.

“I do not believe that this was a justified use of deadly force and have called for the immediate termination of the officer,” Bottoms said.

Brooks’s death followed weeks of protests in major cities across the United States that were triggered by the death of George Floyd, who died in Minneapolis police custody on May 25. A video showed an officer kneeling on his neck for several minutes while he was detained.

The Associated Press contributed to this report.
TOP NEWS