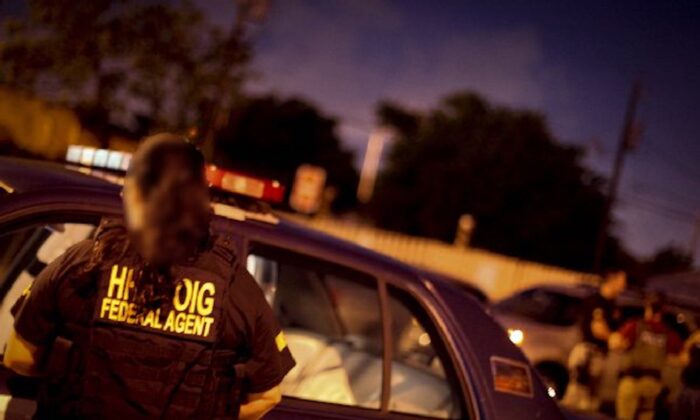 File photo of a federal agent of the Department of Health and Human Services Office of Inspector General. (HHS-OIG)
US News

In what authorities call the largest healthcare fraud and opioid takedown in U.S. history, the Department of Justice on Wednesday announced charges against 345 people across 51 federal districts for having allegedly submitted billions of dollars in fraudulent health care claims. Among the defendants are more than 100 doctors, nurses, and other licensed medical professionals.

The defendants were charged with having submitted in excess of $6 billion in false and fraudulent claims to federal healthcare programs and private insurers, the DOJ announced.

The majority of the alleged losses related to schemes connected to telemedicine—the use of technology to provide healthcare services remotely—comprising more than $4.5 billion in false and fraudulent claims made by more than 86 defendants in 19 federal districts.

The Centers for Medicare & Medicaid Services (CMS) Center for Program Integrity separately announced that it is revoking the Medicare billing privileges of 256 additional medical professionals for their involvement in the fraudulent telemedicine claims.

Court documents alleged that certain telemedicine executives paid doctors and nurse practitioners to order unnecessary medical equipment, diagnostic testing, and pain medications, the DOJ announced, noting that such orders were “either without any patient interaction or with only a brief telephonic conversation with patients they had never met or seen.”

“Durable medical equipment companies, genetic testing laboratories, and pharmacies then purchased those orders in exchange for illegal kickbacks and bribes and submitted false and fraudulent claims to Medicare and other government insurers,” stated the department.

The Department of Health and Human Services (HHS) Office of Inspector General said it has seen a “significant increase” in telefraud since 2016 (pdf).

HHS Deputy Inspector General Gary Cantrell said that telemedicine, when practiced appropriately, can give efficient and high-quality care. “Unfortunately, bad actors attempt to abuse telemedicine services and leverage aggressive marketing techniques to mislead beneficiaries about their health care needs and bill the government for illegitimate services,” he said on Wednesday.

According to the DOJ, the “sober homes” cases involve physicians, owners, and operators of substance abuse treatment facilities who are accused of having participated in schemes that involve the payment of illegal kickbacks and bribes for referring patients to such facilities.

“These ‘sober homes’ cases are particularly egregious, not just because of the substantial amounts of financial loss they cause, but also because of the significant harm they cause to patients who are used and abused along the way,” Acting Assistant Attorney General Brian C. Rabbitt said on Wednesday.

“In many of these cases, defendants are alleged to have preyed upon addicted patients, recruiting them from their hometowns, where they have support networks, and shipping them off to far-away states where they are placed into these so-called ‘sober homes,'” he explained. “Once there, these vulnerable patients are often provided with drugs that undercut their ability to recover from the addiction they are trying to kick, and they are often shuffled from facility to facility to boost headcount and maximize billing, instead of being given the care they so desperately need.”

The DOJ noted that patients were allegedly put through unnecessary drug testing that often billed for thousands of dollars for a single test, and therapy sessions that were frequently not provided, which led to millions of dollars worth of false and fraudulent claims submitted to private insurers.

Rabbitt also announced DOJ cases charging “doctors, lab owners, and others responsible for the illegal prescription and distribution of devastatingly addictive opioid medications.” The DOJ noted that these individuals were involved in the alleged distribution of more than 30 million doses of opioids and other prescription narcotics.

“The opioid epidemic our country is battling is exacerbated when unscrupulous individuals seek to profit from people, in particular those confronting addiction,” Assistant Administrator Tim McDermott of the Drug Enforcement Administration (DEA) said in a statement.

The DOJ also announced that more than 240 defendants are accused of having submitted more than $800 million in false and fraudulent claims to federal programs such as Medicare, Medicaid, and TRICARE, as well as private insurance companies, for medically unnecessary treatments that were often never provided.

“According to court documents, in many cases, patient recruiters, beneficiaries, and other co-conspirators were allegedly paid cash kickbacks in return for supplying beneficiary information to providers, so that the providers could then submit fraudulent bills to Medicare,” the department stated.