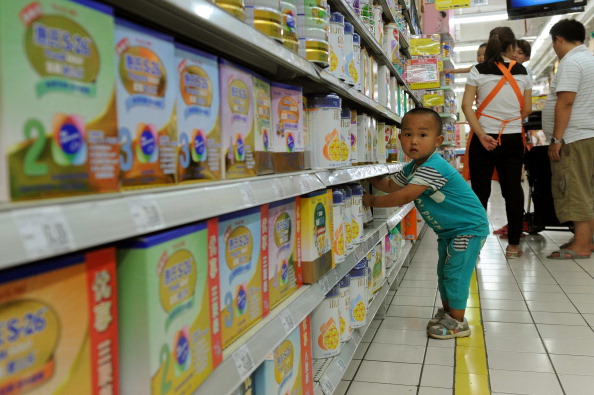 A baby plays around in the imported baby products section while his parents talk to a sales clerk in a supermarket in Beijing in 2013. (STR/AFP/Getty Images)
Chinese Regime

June 16 marks the 10th anniversary of China’s tainted milk powder scandal, when milk powder laced with poisonous melamine sickened hundreds of thousands of infants and caused at least six deaths. Ten years later, Chinese authorities are still stamping out any mention of the incident to keep it from public memory.

Jiang Yalin, whose 11-year-old daughter suffers from kidney stones as a result of consuming the melamine-tainted milk powder as an infant, is a member of “Kidney Stone Babies,” a group founded in 2008 to help parents seek legal redress for their children’s illnesses.

She spoke to Radio Free Asia (RFA) about how the Chinese authorities have kept close watch over her activities.

Recently, she wrote on her WeChat social media account that she planned to commemorate the 10th anniversary of the 2008 scandal in Hong Kong and take her daughter to the Disneyland. En route to Guangzhou, the southern Chinese city bordering Hong Kong, Jiang was stopped by police from her hometown of Jinhua City in eastern China’s Zhejiang Province.

“They [police] told me that my visit [to Hong Kong] startled the Jinhua government officials, including the officials from the city’s Political and Legal Affairs Commission,” said Jiang, adding that “the police took a flight to Guangzhou to chase me down.”

China’s Central Political and Legal Affairs Commission (PLAC) is a security agency that has long been a tool of the Chinese regime’s suppression of dissidents. The agency’s political clout has been weakened under Chinese leader Xi Jinping, who removed the head of the PLAC from being a member of the Politburo Standing Committee, the Communist Party’s most powerful ruling body.

Jiang said her family continues to struggle with the financial burden of treating her daughter, who has chronic pain in her kidneys.

“In the past 10 years, my child has not received any [financial] compensation or any promise of a medical cure,” said Jiang. She explained that while the national health insurance system covered a portion of her daughter’s medical expenses, the Chinese authorities have not established any medical fund for tainted milk victims.

Authorities have instead silenced many parents, most famously Zhao Lianhai, the founder of “Kidney Stone Babies” who has a son who became sick in 2008. In 2010, Zhao was given a 2.5-year prison sentence for “disturbing social order” after he took part in organizing a gathering of parents and accepted media interviews.

Some parents have stopped fighting for compensation and justice after seeing their children recover from their illnesses, according to RFA, because petitioning to the authorities was such an unpleasant experience.

One such parent was Mr. Dong, who explained to RFA that despite years of petitioning, the authorities have not responded to his pleas. He explained that, even now, he is concerned about the quality of domestic milk powder and instead feeds his second newborn child baby powder shipped directly from Australia.

The phenomenon of Chinese traveling abroad and emptying store shelves of baby formula has been reported in many places, including Germany, Australia, Japan, and Hong Kong.